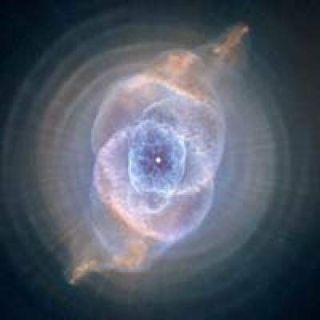 The planetary haze is created by a star like the Sun, which has ejected most of its mass into space. The ejection happens when the light from the star is blocked by opaque carbon. In the middle of the planetary haze the star's core looks like it has become a so-called white dwarf.
(Image: © NASA/ESA/Hubble)

When stars like our Sun die, they bloat to become red giants and then eject gigantic clouds of gas and dust into space. Increasingly, however, scientists found themselves at a profound loss to explain how exactly dying stars could blow away these clouds.

Now astrophysicists propose that unexpected chemical reactions during the formation of stardust could help solve this mystery.

"In the long run, the new scenario may have an important impact on our understanding of the chemical evolution of our galaxy, and the origin of elements crucial for the existence of life," astrophysicist Anja Andersen at the University of Copenhagen in Denmark told SPACE.com.

Stars smaller than the Sun and up to eight times as massive die by swelling up into red giants before shedding most of their mass to shrink into very compact, dying embers called white dwarfs. Two kinds of red giants exist-those with lots of carbon, and others richer in oxygen than in carbon.

Carbon-rich stars release carbon particles such as soot and graphite during their death throes. Scientists proposed these pitch-black grains absorb rays from the dying star and get shot into space by starlight, a theory that fit both the observations and computer models.

Increasingly, however, researchers could not explain how oxygen-rich stars like our own Sun could propel their clouds away during the final stages of mass loss, "what we here call 'the death zone,'" said Iowa State University astronomer Lee Anne Willson. Oxygen-rich stars create large quantities of water vapor and silicates, such as quartz or sand. These are transparent, meaning starlight should go right through them.

This mystery began roughly five years ago and reached a head last year when the calculations of two independent teams of scientists "showed that it seems impossible" for oxygen-rich stars to drive their transparent clouds away, explained astrophysicist Susanne Höfner at the University of Uppsala in Sweden.

Andersen and Höfner contemplated possible solutions. They first pondered whether the silicates might have iron in them, which would render them opaque instead of transparent. But calculations showed the dust grains would have evaporated if they had iron in them.

They next wondered if enough molecules surrounded the core of a dying oxygen-rich star to block out its light and thus create a wind that blew the star's outermost layer into space. But their models suggested these molecules could not block off enough light and create strong enough winds.

Given that stars pulsate as they die, the scientists then suggested these pulsations could perhaps force a star's matter out, but this idea did not match with astronomers' observations.

"The theory fits with all our subsequent model calculations," Andersen said, and it matches observations from dying oxygen-rich red giants. Moreover, Höfner explained "this mechanism strongly favors the presence of magnesium silicates over iron silicates in the interstellar medium," in agreement with recent findings from NASA's comet-sampling Stardust space probe.

Andersen and Höfner detailed their findings in the April issue of the journal Astronomy & Astrophysics.

"The calculations needed to make sure this is right will be hard to do," Willson said. "They make a good argument, but there will be quite a bit more work needed to check that it really does work this way."

If proven correct, the beauty of the new scenario is that it suggests a common driving mechanism for many dying stars shedding their mass via dusty winds, "with possible long-reaching consequences for the origin of chemical elements relevant for life," Höfner said.