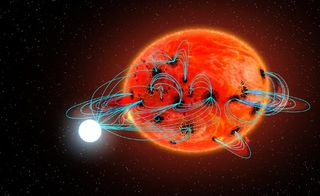 Strongmagnetic fields from the whitedwarf stars, which are burned out old stars, can provide a sort ofelectrical kick start for solar activity by reaching inside their fast-spinningpartners, researchers said.

“Like Dr.Frankenstein zapping an inert corpse, the white dwarfs in these systems producevery strong electrical currents inside the bodies of their partner star, whichcan create violent eruptions where there otherwise would be little if any,”said astronomer Stella Kafka, of the National Optical Astronomy Observatory(NOAO), who led one of two studies into the phenomenon.

Kafka andher colleagues analyzed four sets of highly energetic binary star systems,known as polars, to pin down the effects of white dwarfs on their stellarneighbors.

Theresearch was presented at a meeting of the American Astronomical Society inSeattle.

A whitedwarf is the final stage for stars lacking enough mass to end their lives inmassive stellar explosions known as supernovas.Our Sun and stars up to eight times its mass are destined to become whitedwarfs.

Whitedwarfs tend to have masses about half that of the Sun, but it's all compressed into ballwith a diameter of planet Earth.

In polarbinary systems, white dwarfs are paired with a low-mass, cool star about the diameterof Jupiter and a mass of one-fifthor less that of the Sun. The arrangement makes for close quarters,astronomically speaking, with the two stars orbiting each other in three hoursor less.

The starsare so close that the intense magnetic field of the white dwarf actually passesthrough part of its stellar neighbor, which astronomers believe is not massiveenough to generate flares or so-called “starspots”on its own.

“Thisdiscovery points to a new mechanism for the generation of stellar activity byforces outside the star itself, a phenomenon that we have dubbed 'hyperactivity,'”said study co-author Steve Howell, an astronomer with the NOAO and WIYNObservatory at Arizona’s Kitt Peak National Observatory in Arizona.

Theresearch not only allows astronomers to better understand the interactionsbetween binary systems, but also between a close-orbiting planet and its parentstar, astronomers said.

Editor'sNote: Allweek, SPACE.com is providing completecoverage of the 209th meeting of the American Astronomical Society.