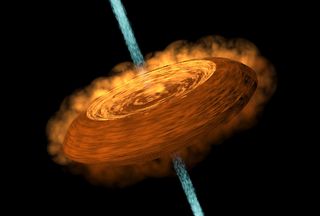 An illustration of a hamburger-shaped accretion disk feeding a young protostar, and the jets of gaseous material ejected from the young star's north and south poles.
(Image: © Yin-Chih Tsai/ASIAA)

A newborn star buried deep inside the Orion Nebula is feeding on a giant, dusty "space hamburger," researchers have discovered.

This astronomical sandwich is actually an accretion disk, or a cloud of gas and dust that rotates around a central point — in this case, a young protostar. Astronomers have seen these disks around stars and even black holes before, but this is the first time anyone has seen one that looks like a giant hamburger.

Using the Atacama Large Millimeter/submillimeter Array (ALMA) in Chile, researchers found more than just the first "space hamburger" — their observations also confirmed that accretion disks can form in the earliest phase of star formation. Because disks around young stars are relatively tiny, astronomers have not been able to clearly image them in the past, the study's authors explain in the new research paper. [Amazing Photos from the Giant ALMA Radio Telescope]

Thanks to the higher sensitivity and resolution of ALMA's telescopes, researchers were able to detect a protostellar disk around a baby star for the first time while getting a detailed look at its structure.

Though the researchers suspected they'd find a protostellar disk, the hamburger-like shape came as a surprise, Chin-Fei Lee, a researcher at the Academia Sinica Institute of Astronomy and Astrophysics in Taiwan, who led the study, told Space.com in an email.

Instead of a round, homogeneous blob, Lee's team saw a dark zone (the analogical beef patty) sandwiched between two brighter features. To see this so-called "equatorial lane," the protostellar disk must be observed close to edge-on, Lee said. Its midplane must also be colder than the "hamburger" buns and opaque in the observed wavelength.

"It is so amazing to see such a detailed structure of a very young accretion disk," Lee said in a statement. "For many years, astronomers have been searching for accretion disks in the earliest phase of star formation, in order to determine their structure, how they are formed and how the accretion process takes place. Now, using the ALMA with its full power of resolution, we not only detect an accretion disk but also resolve it, especially its vertical structure, in great detail."

But not all protostellar disks look like hamburgers, Lee said. "However, we do expect to see more of this toward the younger (Class 0) protostars, because we can resolve more and more edge-on disks now with ALMA."

The protostellar system Lee's team investigated is Herbig-Haro object HH 212, which lies about 1,300 light-years away from Earth and contains a central protostar that's about 40,000 years old (compared to Earth's 4.5 billion-year-old sun). Gas and dust in the accretion disk spirals inward due to the star's gravitational pull, and over time, disks like these will form planets that revolve around their central stars.

With new insights into the formation of disks around baby stars, scientists can learn more about how new planets form, the researchers said in the new paper, which was published April 19 in the journal Science Advances.