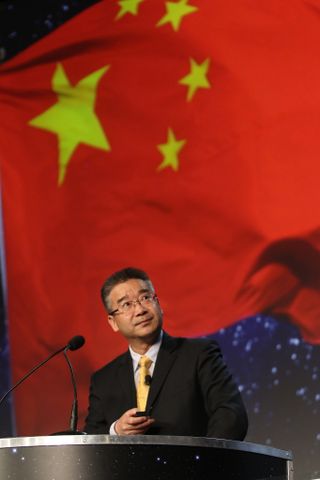 COLORADO SPRINGS — China is pushing forward on a number of space fronts, including milestone-making robotic missions to the moon, as well as scoping out an automated Mars sample-return mission by 2030.

CNSA is the governmental organization of People's Republic of China responsible for the management of space activities for civilian use and international space cooperation with other countries. [U.S., China Will Meet This Year to Talk Space Debris]

Yulong reviewed major elements of China's 2016 "Space White Paper" — a sweeping outline for the next five years of robotic and manned spaceflight, Earth and space science, and an emerging, new thrust in commercial space.

In reviewing China's interest in working with other nations, Yulong said that the country has signed more than 100 space-cooperation agreements with 30 countries and space agencies, and in the future "intends to cooperate with governments around the world," in climate change research, disaster prevention, space safety, and deep space exploration.

China is developing plans for deep space exploration over the next decade that will involve Jupiter, Venus, and asteroid exploration.

On China's manned space program agenda, Yulong said a cargo supply ship is being readied for launch aboard a Long March 7 rocket this month. It will auto-dock with the Tiangong-2 space lab currently orbiting Earth unoccupied, but the mission is a step forward in building and resupplying a larger space station in 2022, he said.

Yulong said that work remains underway to ready the Chang'e-5 lunar probe for an end of November liftoff from the Wenchang Space Launch Center in southern China's Hainan Province. The moon-bound probe will be boosted by a heavy-lift carrier rocket, the Long March 5.

Chang'e-5 is China's first automated moon surface sampling mission and consists of four parts: an orbiter, a lander, an ascender and a returner.

The lander will place samples of the moon in the ascender, which then departs the lunar surface to dock with the moon-circling orbiter and the returner. The samples are to be transferred to the returner for a journey back to Earth.

Also on China's Moon exploration agenda, Yulong said, is the Chang'e-4 that's slated to be launched in 2018. That probe is targeted to achieve the first-ever soft-landing on the far side of the moon, Yulong said.

Yulong said that China approved in 2016 a robotic Mars lander to be launched in 2020. A second step is a return sample from Mars by 2030, he said.

Asked about the challenges ahead in lobbing Mars samples back to Earth, Yulong expressed confidence.

"The Mars exploration for China…we have solved all the technical problems," Yulong told SpaceNews.

"We're on track," he said, but added that the investment in the Mars sample effort is still being pursued.