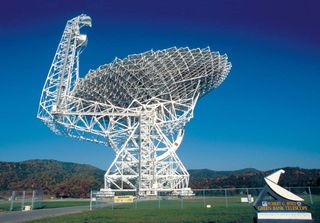 The Green Bank Telescope in West Virginia is one instrument that NANOGrav is using in its hunt for the elusive gravitational waves.
(Image: © NRAO/AUI/NSF)

While we haven't yet found any evidence for alien life, there are a group of dedicated radio scientists who listen to the skies, hoping to find some evidence of intelligence outside of Earth. The cost of this search isn't easy to justify — which is why a new paper suggests using a combination lottery and savings bond to keep funding flowing.

Jacob Haqq-Misra, a research scientist at the Blue Marble Space Institute of Science, suggests that people could purchase a lottery bond that would give them a chance of a big cash prize if and when SETI (Search for Extraterrestrial Intelligence) finds evidence of life elsewhere in the universe. Unlike a conventional lottery ticket, the SETI lottery ticket would function like a bond, with ticketholders receiving a small percentage of its value every year, making the value of the ticket grow.

"The SETI Lottery Bond is a fixed rate perpetual bond with a lottery at maturity, where maturity occurs only upon discovery and confirmation of extraterrestrial intelligent life," Haqq-Misra writes in the paper, which was published in the journal Space Policy and is available in preprint version on Arxiv. "Investors in the SETI Lottery Bond purchase shares that yield a fixed rate of interest that continues indefinitely until SETI succeeds — at which point a random subset of shares will be awarded a prize from a lottery pool."

Down the road, if you'd rather invest elsewhere, you could sell the bond to someone else.

"The total amount of money raised this way would be managed by a financial firm to grow with time, just like mutual funds and other financial products are managed today," Haqq-Misra explained in an email to Seeker.

"In addition to paying back investors a percentage of interest each year, this would also provide periodic payments to sustain SETI research," he added. "The fund managers would also ensure that enough money was kept in reserve for the lottery prize pool."

While there would be some complications in implementing the system, Haqq-Misra said that the payback would be a funding model that, unlike much of science funding, is geared toward long-term success. If it takes several generations to find life, the bond holders could pass them down to their children or grandchildren. If individual bonds prove expensive, Haqq-Misra proposes that some of the money could be raised by crowdfunding.

The drawback, however, is that the United States does not have financial institutes that are authorized to engage in gaming and banking, which would force SETI to look at options such as offshore investment groups.

"There is evidence that lottery bonds are popular in some parts of the world, and further evidence that there is demand for such a product in the US," Haqq-Misra added. "A SETI Lottery Bond is a further step toward long-term savings, and it could be a novel way to increase participation in science as well as financial savings."