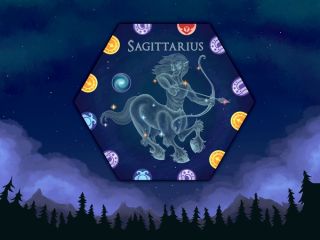 In Constellations, a new tabletop game, players collect types of stars to build the constellations in the sky.
(Image: © Xtronaut Enterprises)

Thousands of years after constellations were first sketched in the sky, professional astronomers and amateurs alike still use them to pinpoint particular stars and find their way around the universe.

A new board game by a NASA scientist, currently raising money on the crowdfunding site Kickstarter, encourages kids to learn about these star patterns, and the types of stars that make up the whimsical designs. The game has blasted past its $15,000 fundraising goal as of this afternoon (March 28), with 25 days to go.

"In this game, players are stargazers, exploring the night sky and collecting stars to define constellations," game co-creator Dante Lauretta wrote on the Kickstarter page. Lauretta is also the leader of NASA's OSIRIS-REx mission to the asteroid Bennu. Lauretta and his collaborators, including game company CEO Michael Lyon and lead designer Ian Zang, previously created the game Xtronaut, which let players build and launch space missions. For Constellations, they also added the illustrator Ashley Kenawell.

In Constellations, players "compete to find the right stars to fit the needed pattern — are B-type stars or F-types required to complete the constellation?" Lauretta said. "Players compete with each other to strategically collect the right stars, reserve patches of the sky for observation, and explore the universe. Once you have your constellation, add it to the map of the night sky being assembled right in front of you."

Players use a unique combination of star cards to create the constellations. The patterns are placed on the board, and fill up as the gameplay progresses. As a supplement, the game includes an educational workbook with information about stars (such as evolution and classification) and the history and mythology of real constellations.

Xtronaut, the company's debut game, launched on Kickstarter in October 2015. The game encourages players to create space missions and move around the solar system while overcoming obstacles such as competing projects and a government shutdown. Xtronaut raised more than $36,000 and received numerous accolades, including being named best family board game for 2016 by Good Housekeeping magazine.

Constellations is sponsored by Meade Instruments, which is providing a telescope as a reward for backers who offer at least $129. Other rewards for backers include a copy of Constellations, a copy of Xtronaut and backer-exclusive cards and mission patches.

You can back the game on Kickstarter, where its campaign ends April 22.