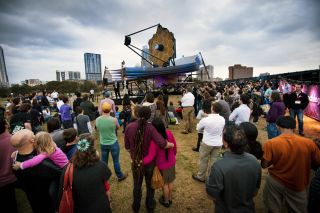 An interactive exhibit on NASA's next flagship observatory, the James Webb Space Telescope, has landed at the 2017 South by Southwest (SXSW) celebration in Austin, Texas.

"The Webb telescope is NASA's top science program in development that will allow scientists to peer ever farther into the cosmos, seeing things no previous telescope has been able to see and explore the formation of the first stars and galaxies," NASA officials said in the announcement.

The $8.8 billion James Webb Space Telescope will launch in 2018. At the exhibit, visitors have the chance to speak with the scientists and engineers behind the mission and the science it will perform.

"The James Webb Space Telescope exhibit at SXSW will feature an augmented reality version of the telescope, an infrared camera demonstration, 3-D animation of the Telescope’s deployment and some of the unique materials used to construct the Webb telescope," NASA officials said.

"They will discuss the innovative technologies behind and fascinating science expected from the Webb telescope that will push the boundaries of what is capable for spacecraft," NASA officials wrote. "Panel topics will address the unique telescope's infrared capabilities to measure varying conditions and atmospheres of other planets."