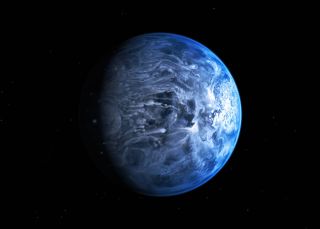 Artist's illustration of the alien planet HD 189733b, which is about the size of Jupiter. HD 189733b's blue hue is probably caused by light scattering off silicate particles in its atmosphere, scientists say.
(Image: © ESO/M. Kornmesser)

The alien planet HD 189733b is a beautiful blue dot in a sea of inky blackness, just like Earth. But that's where the similarities between the two worlds end.

For starters, HD 189733b is much bigger and hotter than Earth; it's about the size of Jupiter and zips around its host star in just 2.2 Earth days. That orbit is so close that the exoplanet is probably tidally locked, always showing one face to its star, just as the moon always shows one face (the near side) to Earth.

And then there's the weather. The winds on HD 189733b (which lies about 63 light-years from Earth, in the constellation Vulpecula) blow at up to 5,400 mph (8,700 km/h) — about seven times the speed of sound. And if that's not crazy enough for you, scientists think the rain on this world is made not of water, but of molten glass.

Why, then, does this bizarre planet appear so superficially Earth-like? It's just a coincidence, scientists said.

"The cobalt blue color comes not from the reflection of a tropical ocean, as on Earth, but rather a hazy, blow-torched atmosphere containing high clouds laced with silicate particles," NASA officials wrote in a statement.

There may be a lot of ocean-free blue planets out there. Indeed, scientists know of two in Earth's own solar system: Uranus and Neptune. The upper atmospheres of both of these "ice giants" contain methane, which reflects blue wavelengths of sunlight back into space.

HD 189733b was discovered in 2005, and scientists figured out its color in 2013 using NASA's Hubble Space Telescope and other instruments. The exoplanet is one of six highlighted in NASA's "Galaxy of Horrors," a special Halloween gallery that the space agency put together this year. You can check out the Galaxy of Horrors here: https://exoplanets.nasa.gov/alien-worlds/galaxy-of-horrors/