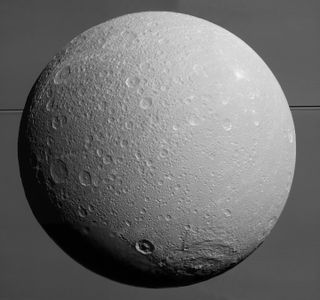 Dione with Saturn and its rings in the background. This image was taken by the Cassini spacecraft on 17 Augustus 2015.
(Image: © NASA/JPL-Caltech/Space Science Institute)

The icy Saturn moon Dione appears to have an underground ocean of liquid water, just like two of its more famous neighbors, a new study suggests.

This huge ocean is probably buried about 60 miles (100 kilometers) beneath Dione's icy shell, according to the study. Intriguingly, Dione's putative ocean is likely in contact with the moon's rocky core, team members said.

"The contact between the ocean and the rocky core is crucial," study co-author Attilio Rivoldini, of the Royal Observatory of Belgium in Brussels, said in a statement. "Rock-water interactions provide key nutrients and a source of energy, both being essential ingredients for life."

If the researchers are correct, 700-mile-wide (1,120 kilometers) Dione would be the third Saturn moon known to harbor a subsurface ocean, after giant Titan and geyser-spouting Enceladus. Astronomers think the Jupiter moons Europa, Callisto and Ganymede also have buried oceans, and recent research indicates Pluto might as well.

The study team, led by Mikael Beuthe of the Royal Observatory of Belgium, modeled the icy shells of Dione and Enceladus using gravity data gathered by NASA's Saturn-orbiting Cassini spacecraft during its various flybys of the satellites.

Similar simulations performed by other researchers in the past have suggested that Dione is sea-free and that Enceladus' ocean is buried deep. But Beuthe and his colleagues added a new wrinkle into their models.

"As an additional principle, we assumed that the icy crust can stand only the minimum amount of tension or compression necessary to maintain surface landforms," Beuthe said in the same statement. "More stress would break the crust down to pieces."

The team's results indicate that Enceladus' ocean is close to the surface, especially near the moon's south pole — which makes sense, because geysers blast water ice and other material deep into space from this region.

The simulations also suggest Dione has a vast ocean tens of kilometers deep, buried under many miles of ice. This ocean has also probably existed for the moon's entire history, meaning there has potentially been plenty of time for life to take root and evolve beneath Dione's battered, icy shell, researchers said.

The new study was published online this week in the journal Geophysical Research Letters.