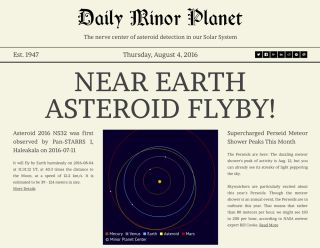 Good news, asteroid junkies: You can now get a daily space-rock fix.

A new service called the Daily Minor Planet informs the public about cosmic debris and the risks associated with asteroids zooming near Earth. Scientists from the Minor Planet Center at the Harvard-Smithsonian Center for Astrophysics and volunteers from the Oracle Corporation created the service.

"Most people don't realize how common asteroid flybys are," Matt Holman, director of the Minor Planet Center and astronomer at the Harvard-Smithsonian Center for Astrophysics, said in a statement announcing the new website. "We want the Daily Minor Planet to educate readers in an entertaining way, so the next time they see a doom-and-gloom asteroid headline, they'll know where to go to find the facts." [Potentially Dangerous Asteroids (Images)]

Known asteroids of varying size pass within a few million miles of Earth almost every day. The Daily Minor Planet reports on those near-Earth encounters and provides information on the time and distance of each asteroid's closest approach, according to the statement.

But the news never sleeps. When there are no asteroids to report on, the Daily Minor Planet will cover new asteroid discoveries and announcements.

"A project like this gets people to stretch their minds," Jeremy Ashley, Oracle group vice president, said in the statement. "It's easy to get into a rut, but when you gather different people together and they bring different perspectives, [then] new ideas start to emerge. That's the definition of innovation."

The Daily Minor Planet stems from an interactive website called Asteroid Explorers, which aims to increase public awareness of asteroids and the risk they pose to Earth, the news service's creators said.

"I want to thank the Oracle volunteer team and the others for their excellent work on the Daily Minor Planet and the Asteroid Explorer," Victoria Friedensen, the planetary defense program executive for the Asteroid Grand Challenge at the NASA Planetary Defense Coordination Office, said in the statement. "These are two excellent examples of how government, academia and the private sector can work together to improve our defense from an impact on Earth."

The Daily Minor Planet's name is an homage to the Daily Planet, the Metropolis newspaper that employs Superman's alter ego, Clark Kent, in the DC Comics universe. It's also a reference to the historical name of asteroids: minor planets. Visit www.minorplanetcenter.net/daily-minor-planet to subscribe to the new service and receive emails on the latest asteroid news.