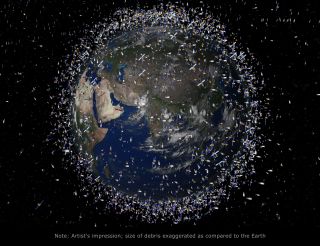 MAUI, Hawaii – China and the United States plan to hold a second set of talks later this year to discuss how their militaries operate in space.

In a keynote speech here Sept. 22 at the AMOS conference, Frank Rose, the assistant secretary of State for arms control, verification and compliance, said that the upcoming discussion would likely include talk of space debris.

While representatives from the U.S. and China have met previously to talk about civil uses of space, the two sides met for a separate discussion of military space topics for the first time in May. [7 Wild Ways to Destroy Orbital Debris]

Space debris has been a divisive issue between the countries for nearly a decade.

On Jan. 11, 2007, China deliberately destroyed one of its defunct weather satellites known as Fengyun-1C using a ground-based, medium-range ballistic missile. The action, which was widely condemned throughout the international space community, left a cloud of potentially hazardous debris in a heavily used belt of Earth orbit.

Since that event, U.S. Defense Department leaders say China continues to develop anti-satellite weapons and officials point to similar tests in 2010, 2013 and 2014.

Leaders of the U.S. intelligence community and the Defense Department frequently point to China's actions in developing anti-satellite weapons as a driver in its ongoing space protection efforts.

But Rose said he had "a very frank exchange" with his counterpart from the Chinese Ministry of Foreign Affairs at a meeting in Washington, D.C. in May and that the conversation included space debris, preventing collisions on orbit and China's anti-satellite systems.

"It's very clear there are new threats to the space systems and the space systems of our allies. At the same time, we need a comprehensive approach to this threat. There is no silver bullet," Rose said. "We want to promote strategic restraint where we can. We've also made it very clear to China, Russia and other potential adversaries the United States will defend ourselves and our friends in outer space."

But Rose also said the two countries are making progress. Following U.S. President Barack Obama's visit to China earlier this month, the White House issued a fact sheet saying "the United States and China recognized that space debris can be catastrophic to satellite and human spaceflight, and that, due to the global dependence on space-based capabilities, the creation of space debris can seriously affect all nations."

Rose said that five years ago, such discussions would have been nearly impossible. But in the last 18 months he has been to China seven times and worked hard to find common ground on the issue.

Now, he said, China takes "space debris very seriously" and U.S. State Department officials have been encouraged that China's recent anti-satellite tests have not created debris. At the same time, in recent years, the Air Force has provided China thousands of collision alert, warning that debris from the 2007 test was nearing their satellites.

"We have made significant progress. Are we where I would like us to be? The answer is no," Rose said. "But if you had asked me five years ago whether the United States and China would release fact sheets on the challenge of space debris at the presidential level, I would have said 'You're smoking something.'"