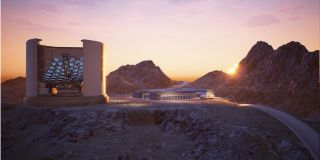 If there's anything we've learned from scouring thousands of planetary candidates over the past decade, it's that finding life beyond Earth is an intensive search.

We've got observatories in space and observatories on the ground. We've got plenty of evidence of rocky planets in the habitable regions of their respective stars. What we're missing, though, is information about these planets' atmospheres. Is there oxygen or other life-friendly elements?

A group of astronomers now hope to fill this gap in our knowledge. They are raising money for a nearly $4 million project called the Polarized Light from Atmospheres of Nearby ExtraTerrestrial Systems (PLANETS) telescope. If funding, site approvals and construction all line up, they hope to have the 1.85-meter telescope ready by mid-2018.

The ultimate goal is to create a $600-million Colossus telescope with 60 independent off-axis 8 meter telescopes, all in a single structure, but that's down the road. First things first: the PLANETS telescope has less than a million dollars of funding to go before construction can begin.

The PLANETS Foundation has a team of astrophysicists and imaging experts on board, as well as several institutions and they are hoping to convince the astronomy community that they can make a valuable contribution to looking at potentially habitable planets. Jeff Kuhn, the leader of the consortium, talked about the recent discovery of a planet around Proxima Centauri as one example worthy of study.

"One of the interesting questions that we're all faced with is this planet around Proxima is very close to the star, and there's a lot of interest in understanding whether planetary atmospheres can exist in those conditions," said Kuhn, who is also a professor at the University of Hawaii's institute of astronomy, in an interview with Discovery News.

For a ground-based telescope, light is both an enemy and a friend. It can see light from distant stars and planets, but the atmosphere tends to scatter the light and make those objects more difficult to see. Telescopes themselves can also scatter light, even while collecting it.

The PLANETS telescope has an optical design that is supposed to minimize scattered light by eliminating a secondary mirror that often contributes to this problem. The mirrors are also intended to be lightweight and flex according to the light it receives from the star.

The off-axis telescope has several scientific targets, including atmospheres of planets in the solar system, atmospheres of exoplanets, protoplanets being born, and biosignatures (chemical signatures of life) on potentially habitable exoplanets.

Site approvals are currently being sought for an existing building on Hawaii's Haleakala, a location also known for hosting observatories such as Pan-STARRS and the Zodiacal Light Observatory. For more information on the project, visit the PLANETS Foundation website.