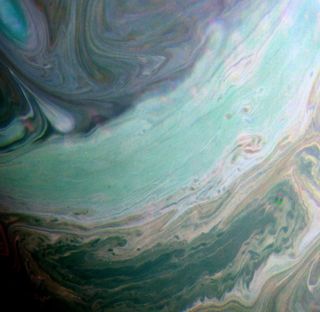 A new photo of Saturn taken by NASA's Cassini spacecraft depicts the planet's northern hemisphere as a swirling mess of green, blue and purple clouds. What looks like a colossal oil slick on the otherwise yellow-tinted planet is actually a matter of wavelength.

The funky-colored clouds in the Saturn photo are the result of the spectral filters on Cassini's camera. These filters can selectively reflect or transmit specific colors of light.

Gill used a combination of spectral filters that are sensitive to infrared light at wavelengths of 750, 727 and 619 nanometers. The human eye can typically see light only in the range of 390 to 700 nanometers, so using the spectral filters allows people to view what is otherwise invisible to the naked eye. This type of infrared filter allows researchers to study how Saturn's atmosphere reflects and absorbs specific wavelengths of sunlight.

The Cassini spacecraft has been in orbit around Saturn since 2004 to study the planet and its moons, and is expected to do so until the mission ends, in September 2017.