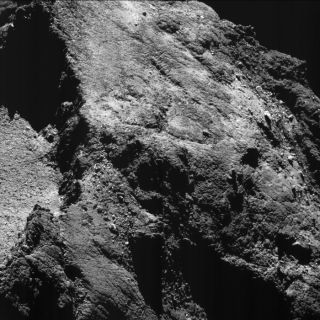 This image, captured by Europe's Rosetta spacecraft on Aug. 6, 2016, shows some of the complex and varied topography of Comet 67P/Churyumov-Gerasimenko.
(Image: © ESA/Rosetta/NavCam – CC BY-SA IGO 3.0)

On Aug. 5, 2014, Rosetta became the first spacecraft ever to orbit a comet when it arrived at an icy wanderer known as 67P/Churyumov-Gerasimenko. Rosetta has observed Comet 67P in a number of ways from a variety of different vantage points over the past 24 months, as you can see in this video animation.

"The spacecraft has performed daring close flybys and made distant excursions to sample gas, dust and plasma at a range of distances, giving unparalleled insight into the processes that operate at the comet and how it interacts with its environment as it hurtles through space," European Space Agency (ESA) officials wrote in a statement today (Aug. 8).

"Rosetta has mapped the comet’s curious shape and given us awe-inspiring views from near and far, spotting changes in its surface features and watching as jets of gas and dust stream out in to space — sometimes unexpectedly as sudden outbursts," they added.

The Rosetta mothership also carried a washing-machine-size lander called Philae, which touched down on Comet 67P on Nov. 12, 2014, after two unplanned and anxiety-inducing bounces.

Philae operated for about 60 hours on the 2.5-mile-wide (4 kilometers) comet's surface, then went into an extended hibernation period before being officially powered down last month. (Mission team members had hoped Philae could collect data longer, but the solar-powered probe came to rest in the shadow of a cliff.)

The Rosetta orbiter will soon follow Philae onto the comet's surface, and into oblivion. Comet 67P is zooming away from the sun, and Rosetta's solar panels soon won't be able to gather enough light to power the craft and its instruments. So, on Sept. 30, Rosetta will end its life with a controlled impact onto 67P's surface.

Rosetta launched in March 2004, then took a long and looping trip through the solar system before finally reaching Comet 67P a decade later. The total cost of the mission is about 1.4 billion euros ($1.55 billion at current exchange rates), ESA officials have said.