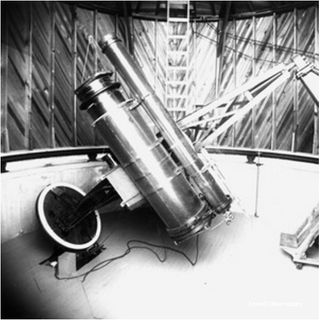 The thing with astronomical discoveries throughout history is that it's usually the astronomer, not the telescope, that is forever remembered. But when you visit the observatories where some of the biggest discoveries have been made, it becomes clear that the telescope is a monument in itself and a focal point for communities to be proud of.

RELATED: From the Start, Pluto was a Puzzle: Timeline

One such monument is near Flagstaff in Arizona that has the very proud distinction of being the telescope that was used to discover Pluto. And 86 years after it played a key role in that discovery, culminating in the NASA New Horizons flyby last year, the telescope needs some love and a Kickstarter campaign has been set up to renovate the telescope and its dome.

It was 24-year-old astronomer Clyde Tombaugh who made that fateful find on Feb. 18, 1930, as he was poring over photographic plates that were taken the previous month at Lowell Observatory. The plates came from a telescope that was built with the explicit task to seek out the mysterious "Planet X" in the outer regions of the solar system. The quest was started by Lowell Observatory's founder Percival Lowell in 1909, but the search went on long after his death in 1916, resulting in the discovery of Pluto by Tombaugh 14 years later. Although it turned out that Pluto wasn't Lowell's "Planet X," it was a planet nonetheless.

But in 2006, after the discovery of Eris, Pluto was controversially reclassified (or "demoted" as it was widely seen) from a "planet" to a "dwarf planet," an event that reverberates with astronomers and the public to this day.

RELATED: NASA's Mission to Pluto by the Numbers

"For the visitors that come (to the observatory), Pluto has been controversial for so long — "Is it a planet? Isn't it a planet?" — and that's not going to change I don't think," Kevin Schindler, Lowell Observatory Historian, told Discovery News. "And because of that controversy, people want to learn even more about it.

"This discovery was made in America, it's often called "America's Planet" or "Arizona's Planet" or "Flagstaff's Planet," there's a certain level of community pride that comes with it. So while our visitors like to hear about the discovery of Pluto by Clyde Tombaugh, they go into whispers when they see the telescope."

WATCH VIDEO: Why Did We Send a Probe to Pluto?

During those pioneering years, astronomers recorded the heavens on photographic plates. To seek out any previously unnoticed planets in the solar system, a blink comparator was used to switch between plates taken on different nights. While switching between plates, distant stars would remain static, but occasionally one of those "stars" would move, revealing that it was in fact a planet. On Feb. 18, 1930, it was the young observatory assistant who saw something move in outer solar system — it was Pluto drifting in front of the stars.

This discovery wouldn't have been possible if it wasn't for the 13 inch "astrograph" (or astronomical camera) that imaged the sky to take the original photographs. But 87 years after its construction, the telescope and its dome are in urgent need of attention and it is hoped that, through the power of crowdfunding, the Pluto Discovery Telescope won't only be "visitor ready," it could also be used to image the famous little world once more.

"We see the telescope as a major part of the visitor experience (at the observatory)," said Schindler. "It's one of the top things they want to see ... so (after repairs are made) its prime use will be availability for daytime tours. But what we'd like to do is to put it back into operation to do some periodic observing which we could not only image Pluto, but other stuff in the sky also."

The Kickstarter campaign is aiming to raise $22,765 to renovate the telescope (at time of writing, the campaign had raised $11,938 with 27 days to go), but the majority of funds will go into dome renovations, said Schindler. Age-related wear and tear, weathering and rotting wood are major concerns. Also, to make it ready for tours once more, the interior will need to be refurbished, including repairs to the steps that access the dome, carpeting and paint work.

As for the telescope itself, after decades of use it's really worn, particularly the scales that are used to position the telescope. "The right ascension and declination are almost illegible because the numbers have worn off over the years," Schindler added.

Once renovated, it is hoped that visitors might even be able to image Pluto themselves. Though the dwarf planet will just be a faint dot in a star-filled sky, Schindler thinks that "historically it will be really neat" to see a distant Pluto through the lens of the telescope that first discovered the little world.

Interestingly, the Pluto Discovery Telescope's scientific career only began with the discovery of Pluto in 1930. It was used for scientific studies until 1970 when it was moved from its dome and taken to a dark sky site around 14 miles out of town and used for asteroid and comet observing. In the early 90s the decision was made to return the telescope to its Lowell Observatory home.

In 1996, Lowell astronomers used the telescope to observe Comet Hyakutake and then Comet Hale-Bopp when the two famously bright comets soared through the inner solar system. According to Schindler, these were the last celestial objects the Pluto Discovery Telescope imaged.

RELATED: Flagstaff Goes To The Moon

But the telescope's legacy lives on in the astronomers who work at Lowell Observatory, many of whom are deeply involved in Pluto science including the New Horizons mission that brought us such an intimate new view of that faint dot in the Kuiper Belt during NASA's historic flyby on July 14, 2015.

Once the funds are raised to repair this monument for the discovery of Pluto, Lowell Observatory will, once again, have eyes on the small, controversial world. And visitors will be able to see Pluto through the renovated telescope that was used to discover it, debating the dwarf planet's status during a night under the stars.

"People have such a connection with Pluto ... there's a certain magic," said Schindler. "There's a lot more feeling and emotion over Pluto than the other planets."

It just so happens that Lowell Observatory is home to another rather special telescope — the Discovery Channel Telescope. To find out more, watch this special DNews video of when Trace checked out "our" telescope: