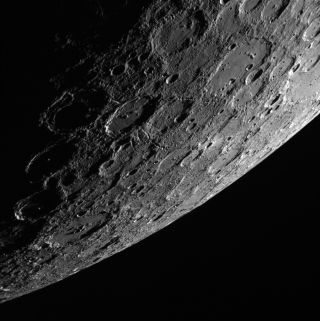 A rare type of meteorite found on Earth may have been a critical ingredient in the geologic recipe that shaped the surface of Mercury, new research shows.

An amazing variety of features cover the surface of Mercury, which likely formed when material in the planet's mantle (the layer just below the surface crust) melted and came to the surface through volcanoes. But Mercury's mantle is shallow compared with other rocky planets, and the authors of the new research say that creates a puzzle as to why the surface looks the way it does.

New experiments on a type of meteorite known as enstatite chondrites show that with heat and pressure, these space rocks could be responsible for the plethora of surface features observed on Mercury today, according to the research presented at the Goldschmidt geochemistry conference in Yokohama, Japan, in June. [Photos of Mercury from NASA's Messenger Spacecraft]

Mercury is somewhat unique among the rocky planets in our solar system because it has a massive, concentrated iron core that represents 70 percent of the planet's mass ─ whereas Earth's core makes up only 30 percent of its mass, according to a statement from the Goldschmidt conference.

Mercury's prominent core is a product of the conditions under which it formed, Asmaa Boujibar, a postdoctoral fellow at NASA's Johnson Space Center and lead author on the new research, told Space.com. Specifically, the material that formed Mercury had a very low abundance of oxygen, which caused nearly all of the iron that was present to sink into the core, Boujibar said. The boundary between Mercury's mantle and its core is only about 248 miles (400 kilometers) below the planet's surface.

There is a region on the surface of Mercury about the size of Canada that is extremely rich in magnesium — with such a shallow mantle, a concentration like this might suggest that the mantle itself was extremely varied, and contained sections of concentrated elements like magnesium.

Boujibar and colleagues wanted to see if one type of composition spread out through the entire mantle could explain the features on the surface, so first they looked to the class of meteorites called chondrites.

"Chondrites are primitive meteorites that contain all material we can find in cores, mantles and crusts," Boujibar told Space.com an email. "They represent the material of the solar system before the formation and differentiation of terrestrial planets."

Enstatite chondrites are high in sulfur, and contain relatively little oxygen, and therefore "may be a good proxy to the chemical building blocks"that created Mercury, according to the statement from the Goldschmidt conference.

"We took a powdered chemical mix similar in composition to enstatite chondrites … and subjected it to high pressures and temperatures," Boujibar said in the statement. "The pressures were high, up to 5 gigapascals (50,000 times the Earth’s atmospheric pressure), which is the sort of pressure where you can form diamonds. This is the pressure of Mercury’s core-mantle boundary."

The researchers found that by varying pressure and temperature on the enstatite chondrites, they could produce the elemental concentrations seen on Mercury's surface. Their results also match previous observations suggesting that Mercury's surface features can generally be divided into two groups — one consisting of older surfaces, and the other of newer surfaces, including the Northern Volcanic Plains.

The sulfur content of the enstatite chondrites seems to be a key factor in the concentration of magnesium and calcium, in particular, Boujibar told Space.com.

"The role of sulfur on magma composition was difficult to predict as Mercury is the only terrestrial planet with such high sulfur concentrations," Boujibar said in the statement. "Both effects of pressure and sulfur explain the overall heterogeneous surface composition of Mercury."