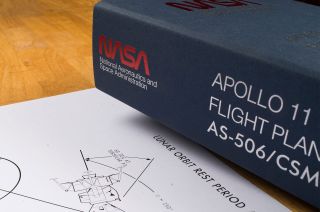 It was the minute-by-minute plan that put the first men on the moon in July 1969.

"We've set out to produce the highest quality reproduction of the Apollo 11 manual that was used by Mission Control, astronauts and supporting personnel," wrote Reproduction IO, the Melbourne, Australia-based team behind the Apollo 11 Flight Plan Re-issue, on the crowdfunding website.

"The trajectory parameters used in this Flight Plan are for July 16, 1969 launch," the original plan's introduction read. "This document schedules the [spacecraft] operations and crew activities to fulfill, when possible, the test objectives defined in the mission requirements [for a] lunar landing."

On July 20, 1969, Neil Armstrong and Buzz Aldrin landed on the moon and walked on its surface as their crewmate, Michael Collins, orbited above. The three returned to Earth four days later.

After the mission, the original copies of the Apollo 11 flight plan became mementos for those who worked on the lunar landing. In recent years, those same documents have sold for hundreds, if not thousands of dollars, and those are just the copies that were used on the ground.

Single pages that were flown on board Apollo 11 have sold for tens of thousands dollars. One of those pages is being auctioned Wednesday (July 20) by Bonhams in New York, where it is expected to sell for $18,000 to $25,000.

Given the demand for the originals and the general interest in the mission, the Apollo 11 plan has reproduced before.

"We have been disappointed with [their] quality," explained Reproduction IO. "They are only available as eBooks, use incorrect fonts and have used automated tools to convert graphics to vector illustrations." [NASA's 17 Apollo Moon Missions in Pictures]

"This is a hit and miss approach... that doesn't stay faithful to the original design and layout."

So the re-issue team is starting from the ground up.

"We are starting from the beginning and reproducing every single page, using [the] accurate fonts, colors, spacing and paper, as well as reproducing all vector graphics based on very high resolution scans of the original," they stated.

Reproduction IO has completed a prototype, confirmed a manufacturer for the binders that will hold each reprint and identified a printer that can meet their specifications. The Kickstarter is providing the funds needed to go to print.

Each backer will also be able to choose from a number of binder designs, including art based on the NASA brochure for the Apollo 11 mission.

The project will be funded when it closes on Kickstarter on Aug. 15. Reproduction IO expects to begin shipping the flight plans in December.