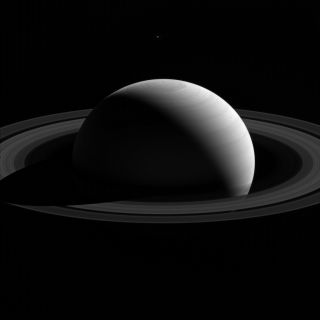 But it's all an illusion of perspective: Tethys actually orbits almost exactly around the gas giant's equatorial plane, NASA officials said in a statement unveiling the image on Monday (July 11).

Tethys is one of at least 62 moons that travel around the solar system's best-known ringed planet, and it is composed almost entirely of water ice. Tethys orbits Saturn at a distance of 183,100 miles (294,660 kilometers), which makes it the third most distant of the planet's major moons. [See More Photos of Saturn's Glorious Rings]

"This view looks toward the sunlit side of the rings from about 17 degrees above the ring plane," NASA officials said in a statement. "The image was taken with the Cassini spacecraft's wide-angle camera on Jan. 26, 2015, using a spectral filter, which preferentially admits wavelengths of near-infrared light centered at 752 nanometers."

The Cassini spacecraft has been orbiting Saturn since 2004, during which time it has gotten a closer look at the planet's atmosphere, rings and its many moons. Cassini's images of Tethys have revealed many interesting features, including a large impact crater called Odysseus and mysterious arc-shaped red streaks on the moon's northern side.

The red streaks of material crisscrossing on the surface of Tethys came as a surprise to scientists, as red is a color rarely found in the atmosphere. While scientists still don't know exactly how the red arcs formed, current theories suggest they may be remnants of gas from the moon's interior. However, follow-up Cassini observations of Tethys in higher resolution will help confirm the origin of these mysterious markings.

The Cassini mission will come to a close in September 2017, when the spacecraft will intentionally plummet into Saturn's atmosphere.