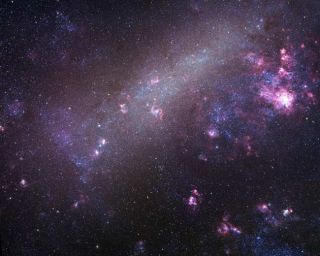 SEATTLE - A new detailed study that tracked two of the Milky Way's galactic neighbors, the Large and Small Magellanic Clouds, shows they are hurtling through space nearly two times faster than previously thought.

The two clouds, which are actually miniature galaxies, have long been thought to be gravitational companions to our own much larger galaxy.

The finding, presented here at the 209th meeting of the American Astronomical Society, raises a number of surprising possibilities, any of which-if borne out-could rewrite astronomy textbooks.

One explanation is that the Milky Way is twice as massive as previously thought. If the star-packed clouds are gravitationally bound to our galaxy as commonly thought, then the Milky Way must be more massive to maintain its grip on such fast-moving objects.

Another possibility is that the clouds are not bound to our galaxy, but merely visiting passersby that will escape the Milky Way in a few billion years.

"The Magellanic Clouds may not be true companions of the Milky Way," said study team member Nitya Kallivayalil of the Harvard-Smithsonian Center for Astrophysics. "Perhaps they are travelers just passing through the neighborhood."

Yet another alternative is that the dark matter distribution of the Milky Way is not pancake-shaped or spherical as some theories have predicted, but that it is strewn in some other way that allows our galaxy to keep a firm gravitational grip on the clouds.

"It would require a halo that is much more elongated," Kallivayalil explained. "It would be kind of like a cucumber, so it has one long axis and two short axes."

The researchers obtained their velocity measurements by mapping the three-dimensional movement of the clouds in the sky.

"In astronomy, it's relatively easy to determine if something is moving towards you or away from you. That's called the radial velocity," Kallivayalil said.

More difficult, however, is measuring a celestial object's "proper motions," that is, its left-right and up-down movements.

To obtain these values, Kallivayalil and her team used NASA's Hubble Space Telescope to measure the clouds movements against distant quasars located so far that they appear stationary in space.

The study also reveals that the clouds are moving faster than expected relative to each other. This could help explain why they have not merged with each other yet, as some theories predict they should have.

It is also possible that the clouds are not gravitationally bound to each other either, and that they might actually part with each other in the future. The relative velocities of the clouds to each other is about 62 miles (100 km) per second, fast enough for one of them to break away from the other's gravity.

"I think it's very interesting that there've been so many papers written about the Magellanic Clouds assuming that they've been bound to each other and the Milky Way. It seems with these new velocities, we've had to really rethink this picture," Kallivayalil said.

Daniel Zucker, an astronomer at the University of Cambridge in the UK who was not involved in the study, said that work by the team is "revolutionary," and important for both the "understanding the motions of the Magellanic Clouds ... and their use as probes of our own Milky Way."