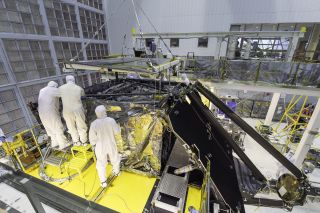 The successor to NASA's iconic Hubble Space Telescope is now a big step closer to its anticipated 2018 launch.

Technicians have installed the science instruments on NASA's James Webb Space Telescope (JWST), an $8.8 billion observatory that will study some of the most distant objects in the universe and scan the atmospheres of alien planets for signs of life, among other tasks.

The installation required a crane and about two dozen engineers and technicians, who attached the science package in a huge clean-room at NASA's Goddard Space Flight Center in Maryland. This package consists of the collection of cameras and spectrographs that will record the light collected by JWST's 21.3-foot-wide (6.5 meters) primary mirror.

"This is a tremendous accomplishment for our worldwide team," JWST project scientist and Nobel laureate John Mather, who's based at Goddard, said in a statement late last month. "There are vital instruments in this package from Europe and Canada as well as the U.S., and we are so proud that everything is working so beautifully, 20 years after we started designing our observatory."

The team was trained using simulations, test runs and a mock-up of the science package before actually doing the installation, NASA officials said.

"Our personnel were navigating a very tight space with very valuable hardware," Jamie Dunn, manager of JWST's Integrated Science Instrument Module (ISIM), said in the same statement. "We needed the room to be quiet so if someone said something we would be able to hear them. You listen not only for what other people say, but to hear if something doesn't sound right."

The telescope now will undergo acoustic and vibration tests to make sure JWST can survive the rigors of launch, NASA officials said.

JWST is optimized to view the universe in infrared light. It should help researchers learn more about relatively nearby exoplanets, study the universe's first stars and galaxies, and gain a better understanding of the history of the cosmos, NASA officials have said.