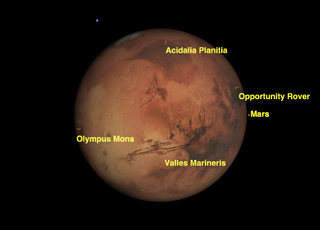 Last Sunday morning (May 22), Mars reached opposition with the sun, meaning the Red Planet, Earth and the sun were all arrayed in a straight line. But the moment did not mark Mars' closest approach to Earth.

Opposition and closest Earth approach occur on different days because the orbit of Mars is elliptical. When opposition occurred May 22, Mars was still approaching Earth on its orbital track, and will not reach minimum distance to Earth until May 30. After 5:35 p.m. EDT on that date, Mars will begin to recede from Earth. [Video -  Skywatching Mars: 2016 Is A Great Time!]

The graphic shows how Mars would appear viewed with a superb telescope at the exact instant of closest approach. The landing site of NASA's Opportunity rover is just rotating out of sight on the Red Planet's eastern limb, and the solar system's highest volcano, Olympus Mons, is just coming into view on the western limb. Mars' Valles Marineris, far larger and deeper than Earth's Grand Canyon, is close to the center of the disk, and the dusky Acidalia Planitia is high to the north, close to the small north polar cap.

What can you see with an ordinary amateur telescope? Very little, I'm afraid. You might see a hint of the polar cap, and a few dusky shadings. Astronomers studying Mars from Earth use a slightly different terminology. Acidalia Planitia is known as the Mare Acidalium, the dark area to the southeast of the Valles Marineris as the Mare Erythraeum, and the dark area just south of Marineris is called Solis Lacus. These older names are, like the "seas" and "lakes" on the moon, imaginary bodies of water on a dry world.

When lighting conditions are exactly right, Olympus Mons can be spotted by keen-eyed observers on Earth, but the mighty Valles Marineris has never been seen from here (although the huge canyon complex has been mapped in detail by satellites in orbit around Mars).

Regular observers of Mars soon become familiar with the normal patterns of light and dark on its surface, known as "albedo markings." If you observe Mars over a few hours, you will see these markings appear to move slowly across the disk, as Mars rotates just slightly more slowly than Earth, a full rotation taking 24 hours, 37 minutes and 23 seconds. Because of Mars' slightly longer day, if you observe Mars at the same time on successive nights, the markings will seem to move.

Sometimes the albedo markings seem to change shape. Usually this is caused by gigantic dust storms sweeping across the face of Mars. Recently, British amateur astronomer Damian Peach reprocessed a number of old images made of Mars in the 1930s, 1940s and 1950s, using modern image-processing techniques. Peach's work revealed amazing detail not visible in the original images, and some of this detail has shown clear changes from back then to modern times. It is thought that these changes result from the shifting sands of Mars over the decades.

Nowadays, most of the serious amateur studies of Mars are made through imaging, with multiple images being combined by "stacking" to bring out the finest detail. These images rival or exceed the finest professional images of only a few years ago. However, there still are "old school" amateurs like myself sketching Mars using centuries-old techniques.

Editor's note: If you snap an amazing photo of Mars and would like to share it with Space.com and our news partners for a possible story or image gallery, send images and comments to managing editor Tariq Malik at spacephotos@space.com.