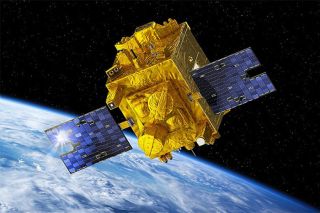 Artist's concept of the Microscope spacecraft in orbit.
(Image: © CNES)

In the late 1500s, the Italian scientist Galileo Galilei conceived of an experiment that changed a foundation of physics. He mulled — and by some accounts actually tested — what would happen if two spheres with different weights were dropped at the same time from the Leaning Tower of Pisa.

At the time, the prevailing theory of gravity, developed almost 2,000 years earlier by the Greek philosopher and scientist Aristotle, attributed the speed of falling object to its proportional weight, with heavier objects falling faster than lighter ones.

Galileo believed that mass was immaterial to an object's falling speed. All would hit the ground at the same time no matter how much they weighed. From that, he deduced that in a vacuum, all bodies would fall at the same speed, an idea that underpins Albert Einstein’s general theory of relativity, published 100 years ago.

The concept, called the equivalence principle, has been well tested on Earth, but scientists wonder if it breaks down when measurements are precise enough.

Putting the principle under a proverbial microscope is the goal of a French-backed space experiment called, appropriately, Microscope. The 668-pound satellite flew as a secondary payload aboard a Soyuz rocket which launched last week from Europe's Kourou, French Guiana, spaceport.

Microscope contains two cylindrical test masses — one made of titanium and the other a platinum-rhodium alloy — which will be electrostatically levitated and stabilized so sensors can measure accelerations equal to a millionth of a billionth of Earth's gravity. Experiments on Earth have been about 100 times less sensitive, mostly because of random, seismic vibrations from naturally occurring and human activities.

"We expect to open a new window beyond Einstein," Microscope lead scientist Pierre Touboul wrote in an email to Discovery News.

If the equivalence principle breaks down, the door opens for new physics to complement general relativity, maybe a new type of interaction or a new type of particle for this interaction, he said.

"If there is no violation, this is a new constraint for quantum gravity theory, and we open the way to perform a better physics experiment," in space, Touboul added.

"Any violation of the equivalence principle would be of vital importance," the French space agency CNES wrote in a summary of the experiment posted on its website.

"It would be the first sign of new physical phenomena … which are not explained by our standard physics model. It would thus bring into question our knowledge at the interface between the field quantum theory and relativity theories of gravitation, as well as the application of these theories to astrophysics and cosmology," CNES said.

Scientists plan to compare the relative motion of the Microscope masses for two years. The instrument was switched on this week, the start of a two-month checkout. Science operations are slated to begin in July.