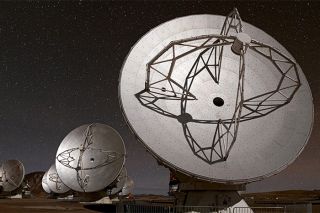 The antennae of the Atacama Large Millimeter/submillimeter Array (ALMA) as seen at night on the Chajnantor Plateau in the Atacama Desert, Chile.
(Image: © ESO)

Since the dawn of humankind, we've looked up to the sky and pondered the awe-inspiring mysteries of the universe.

At first, we explained our rudimentary observations of the heavens with myth and superstition. Then, as we became a society driven by science, we learned that the cosmos couldn't be explained by stories; observation and theory brought the realization that we occupy a planet, orbiting some star — of countless billions others — in a spiral galaxy in a not-so-special region of a vast expanse we now know as a 14 billion-year-old universe.

Though we are only just beginning our epic quest to understand the true nature of space, time, energy and matter, humanity has come a long way since the invention of the telescope and the fundamental realization that gravity dictates the motion of the planets as much as it dictates the fate of the universe. We now have powerful particle colliders that are pulling at the fundamental threads of the structure of matter and spacetime. And we've given our planet "eyes" to see some of the most distant (and therefore, most ancient) structures in the universe.

A consequence of being what we would consider to be an intelligent (and somewhat technologically proficient) life form, despite our terrible flaws, we’ve evolved with the profound ability to not only consider the nature of our universe, but also gone full circle to question our place in it. We are in a golden age of science and at the extreme edge of astronomical discovery are the robotic eyes we now have to see deeper than ever into the cosmic abyss.

Some of our planet's most powerful eyes are located in Chile, where a group of powerful observatories are constantly at work. Managed by the European Southern Observatory (ESO), a collaboration of 16 member states and based out of Germany, the ESO sites in Chile include Paranal Observatory (home to the The Very Large Telescope) and La Silla Observatory. The ESO is also a partner in the the awesome Atacama Large Millimeter/submillimeter Array (ALMA) that was inaugurated in 2013. ALMA is the biggest and most powerful observatory on the planet.

And on Friday, I will be joined by DNews cameraman Alex Gerhard to fly to Chile to visit the ESO sites as part of the #MeetESO event that will see seven other international participants being given exclusive access to the telescopes and their observation sites high in the Atacama Desert. Why next week? Well, the transit of Mercury occurs on May 9 and we'll be there watching the celestial dance from a region that is, frankly, out of this world.

Personally, I've seen many telescopes in my time, but like the other #MeetESO participants, this will be a trip of a lifetime. I've covered the incredible science from the ESO telescopes for Discovery News (and Discovery News alum Nicole Gugliucci even visited ALMA in 2013 — you can check out her adventures here), so I'm excited to not only see these monuments of human ingenuity up-close, but to also talk to the people who carry out the mind-blowing research. And there's a Mercury transit to boot — not bad!

Depending on internet connection availability, I will be checking in via Twitter (via@Discovery_Space and @astroengine), Instagram (@astroengine), Facebook (Discovery News) and there may be an opportunity to do a live Facebook feed via Science Channel. I will also be blogging here when possible. And there will of course be a series of DNews videos on the event. So keep an eye on all those locations when I fly to Santiago on Friday, May 6. Of course, if you have any questions, advice or requests, please let me know.