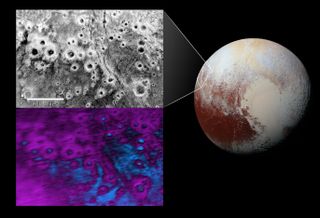 The discovery of strange halo-like craters on Pluto has raised a new mystery about how the odd scars formed on the icy world.

Pluto's "halo" craters are clearly visible in a new image from NASA's New Horizons spacecraft, which made the first-ever flyby of the dwarf planet in July 2015. In the image, a black-and-white view reveals dozens of ringed craters (NASA describes these formations as "haloed") strewn across the dark landscape of Vega Terra, a region in the far western reaches of the hemisphere photographed by New Horizons during its flyby. The craters have bright walls and rims, making them stand out from their darker surroundings.

While the haloed craters are eye-catching, what has really stumped scientists is what these features are made of. [Pluto Quiz! Are You a Plutophile or Not?]

A glimpse at the craters provided by New Horizons' Ralph/Linear Etalon Imaging Spectral Array revealed a surprising connection between the bright halo features and the distribution of methane ice, NASA officials explained in an image description. This methane ice around the craters shows up as a deep purple in an inset view included in the new image. The crater floors and in-between regions, meanwhile, are colored blue to indicate water ice.

"Exactly why the bright methane ice settles on these crater rims and walls is a mystery; also puzzling is why this same effect doesn't occur broadly across Pluto," NASA officials wrote in the image description.

So that's yet another mystery for scientists to ponder as the images and data continue to beam back to Earth from New Horizon's Pluto flyby on July 14, 2015. Mission scientists have said the probe's data download should be complete by October or November.

NASA's New Horizons spacecraft launched in 2006 and is currently headed out into the Kuiper Belt, a region of icy bodies beyond the orbit of Neptune. Last week, mission scientists submitted a proposal for an extended mission that, if approved, would send the probe by the Kuiper Belt object 2014 MU69 on Jan. 1, 2019.