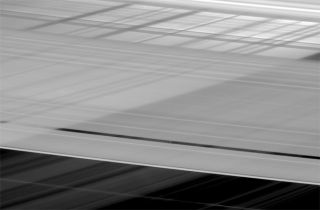 It seems that whenever we look at a new picture of Saturn by NASA's Cassini mission, there's always something unique. And often, there's hidden gem.

Captured on Feb. 11, this observation, at first, doesn't make a whole lot of sense. We already know that Saturn sports hundreds of distinct rings, but they all occupy the same plane. How did Cassini see rings that are… crisscrossed?

Actually, this observation only shows one ring plane, but behind are the shadows of each ring being cast on Saturn's upper atmosphere, creating the illusion there are 2 sets of rings.

But while you digest the scene and work out which lines are rings and which are shadows, you're probably overlooking tiny moon Pan, a 17 mile (or 28 kilometer) wide satellite occupying a gap in the rings (just below the middle of the photo).

NEWS: Saturn's Moons and Rings Younger Than the Dinosaurs?

Many of the gaps in Saturn's rings possess small moons whose gravity keeps these rings clear of debris as they orbit. Pan occupies the famous Encke Gap, for example. Many other gaps, however, don't appear to have moons, so their nature is a little more mysterious. Some theories on ring dynamics suggest some of these gaps may have formed through resonances with Saturn's larger moons.

Regardless of how they were formed, Cassini continues to capture their beauty, constantly reaffirming Saturn as the jewel of the solar system.

For the full-resolution view of this observation, and more information about the Cassini mission, check out the NASA news release.