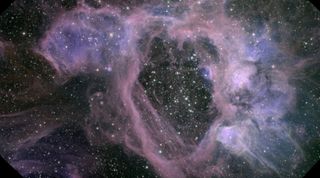 This huge bubble in the Large Magellanic Cloud, a satellite galaxy to the Milky Way that's visible from the Southern Hemisphere, was formed by the explosive death of one or more of the cluster of massive stars inside the bubble. Cosmic rays reaching Earth are created and accelerated by such explosions.
(Image: © Gemini South Telescope in Chile. Composite by Travis Rector of the University of Alaska Anchorage)

Pieces of nearby stars that died in massive supernova explosions continue to rain down on Earth to this day, a new study reports.

The finding suggests that at least two huge stars not far from Earth's solar system exploded within the last few million years, researchers said. This implication, in turn, bolsters the emerging view that supernovas have affected our planet, and perhaps even the evolution of humanity, in the recent past.

Specifically, Binns and his team looked at ACE's many detections of galactic cosmic rays — super-energetic particles that bombard Earth and its environs from every direction. Since ACE's 1997 launch, the scientists found, the spacecraft has spotted 15 cosmic rays that are composed of a radioactive isotope called iron-60. (Isotopes are versions of an element that contain different numbers of neutrons in their nuclei.)

Scientists think iron-60 is produced by core-collapse supernovas, which mark the explosive deaths of huge stars at least 10 times the mass of the sun. Such stars tend to occur in clusters known as OB associations, researchers said.

Iron-60, or 60Fe, has a half-life of 2.6 million years, meaning that half of the iron nuclei in any given sample will decay into another element during that time span.

This relatively short half-life implies that the iron-60 that ACE detected must have been produced in the last few million years, study team members said. In addition, previous research suggests that iron-60 cosmic rays are evidence of at least two separate supernova events — one that synthesizes the isotope, and another one that accelerates them to their incredible velocities.

"The natural place for two or more nearby supernovae to occur within a few million years of each other is in OB associations," Binns and his colleagues write in the new study, which was published today (April 21) in the journal Science. "Thus our observation of 60Fe lends support to the emerging model of cosmic-ray origin in OB associations."

Based on the recent origin of the radioactive iron nuclei, and inferred characteristics of their diffusion and propagation through space, the two supernovas in question likely occurred within 2,000 light-years or so of Earth, the team further determined.

There are more than 20 OB associations that fall into this distance range, including Upper Scorpius, which harbors 83 massive stars; Upper Centaurus Lupus, with 134 such stars; Lower Centaurus Crux, with 97 huge stars; and the Orion OB1 association, which has about 70 such stars.

"These are very likely major contributors to the 60Fe we have detected, owing to their size and proximity," the authors write.

Iron-60 and supernovas have been in the news a lot lately. Last week, for example, a different research team announced the discovery of high levels of iron-60 in moon rocks brought back to Earth by Apollo astronauts. And the week before that, another group — which analyzed iron-60 in deep-sea rocks — reported that recent, nearby supernovas may have blasted Earth with enough radioactive material to affect the course of human evolution.