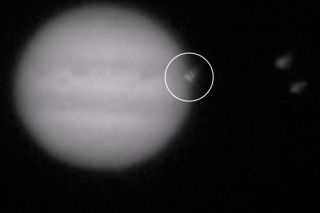 The flash of light (circled) from an impact on Jupiter is seen in this still image from a video taken by amateur astronomer John McKeon of Swords, Ireland, on March 17, 2016.
(Image: © John McKeon)

The St. Patrick's Day impact was nothing special for poor, pummeled Jupiter.

On March 17, a small asteroid or comet slammed into Jupiter, causing a fireball that amateur astronomers spotted from Earth. Such events, while spectacular, are not rare, experts say; the giant planet's immense gravitational pull makes it the solar system's punching bag.

"Since Jupiter is more than 310 times more massive than Earth, Jupiter gets hit thousands of times more often, and impacts are dozens of time[s] more energetic than [on] our small and safe planet Earth," astronomer Ricardo Hueso Alonso, of the University of the Basque Country in Spain, wrote in a blog post Tuesday (March 30). [Jupiter Collision! Impact Captured by Amateur Astronomer (Video)]

The March 17 event was likely caused by an object 33 feet to 65 feet (10 to 20 meters) wide, Alonso added. Comets or asteroids in the same size range were likely responsible for three other Jupiter fireballs that amateur astronomers have observed since 2010, he added.

Many other such strikes are likely going unseen. Indeed, a 2013 study led by Hueso estimated that Jupiter gets hit by objects between 16.5 feet and 65 feet (5 to 20 m) in diameter 12 to 60 times every year.

And that's just the small stuff. Jupiter also got hammered by a 1,650-foot (500 m) asteroid in 2009, and the sizable fragments of Comet Shoemaker-Levy 9 famously barreled into the gas giant in July 1994, leaving impact scars that lasted for months.

Earth's recent impact history pales by comparison. For example, the February 2013 airburst over the Russian city of Chelyabinsk, which scientists think was caused by a 65-foot-wide (20 m) space rock, was the most powerful such event since 1908.

Jupiter impacts are much more energetic than those on Earth, because the giant planet's gravity accelerates the impactors to much greater speeds — a minimum of 134,000 mph (216,000 km/h), Hueso wrote in his blog post. (The Chelyabinsk object, by contrast, probably hit Earth's atmosphere at about 40,000 mph, or 64,000 km/h.)

Events such as the March 17 asteroid/comet strike are interesting far beyond their eye-candy appeal, Hueso emphasized. Studying impacts on Jupiter can help scientists better understand the asteroid population and Jupiter's role in structuring the solar system, he wrote.

"By observing collisions on Jupiter, amateur astronomers opened a new door of knowledge about our solar system — a door we didn't even know existed a few years ago," Hueso wrote.