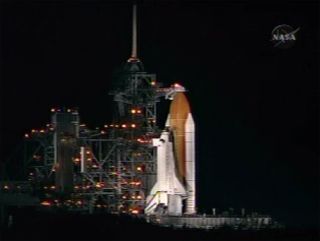 CAPECANAVERAL, Fla.- Seven astronauts aboard NASA's Discovery shuttle will have to wait at least twomore days to rocket towards the International SpaceStation (ISS) after poor weather foiled a Thursday night launchattempt.

"OkayRoman, we gave it the best shot," NASA launch director Michael Leinbach told STS-116 commander Mark Polansky. "We are going to have to declare a scrubat this time."

"Mike, weunderstand, thanks to the team for all the hard work," replied Polansky, whose callsign is Roman."Try not to be too disappointed and we will be ready to support the next timewe get a chance."

Launchcontrollers opted to forgo a Friday attempt to loft Discovery due to a dismal weatherforecast of low clouds, rain showers and high crosswinds that give anyattempted space shot only a 10 percent chance of lifting off.

They are haulinga new piece of the space station's portsidetruss for installation during their planned 12-day spaceflight. They alsoplan to stage threespacewalks at the ISS to secure the new addition and rewirethe orbital laboratory's power grid into its final configuration.

One STS-116crewmember, mission specialist Sunita Williams, will relieve European Space Agencyastronaut, ThomasReiter, who has been aboard the orbital laboratory since July. Reiter willride back to Earth aboard Discovery in Williams' place.

Discovery'slaunch window currently runs from Dec. 7 to 17, and could be extended to Dec.26 if mission managers approve the shuttle for flight during the year-endswitch from 2006 to 2007.

Launch timeis pushed back about 23 minutes for every day of delay, so that the spacecraftcan reach the ISS, which is orbiting about 220 miles (352 kilometers) aboveEarth at a rate of about five miles per second.