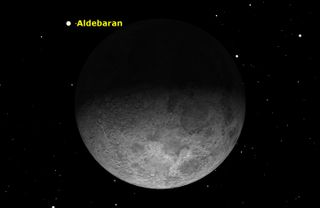 The moon will interact with the beautiful, V-shaped Hyades cluster on Presidents Day evening.

If the skies are clear in your area on Feb. 15, be sure to look up toward the moon, just past first quarter phase and high in the southern part of the sky as darkness falls. And with a pair of binoculars or a small telescope, you'll quickly see that our nearest neighbor in space will be passing through one of the most beautiful open star clusters.

The constellation of Taurus, the bull, is currently at its high point in our midwinter early-evening sky. The famous Pleiades cluster is in the bull's shoulder, while the bull's face is plainly marked by the fine V-shaped cluster of the Hyades. Notice the bright-red star at the end of the lower arm of the V, which represents the bull's fiery eye. That's orange-red Aldebaran, "the follower"; it rises about 80 minutes after the Pleiades and pursues them across the sky. Although it looks like it's among the crowd, Aldebaran is actually a foreground star that does not belong to the Hyades; it's just an innocent bystander. [5 Dawn Planets And A Dusk Comet In Feb. 2016 Skywatching (Video)]

The Hyades are among the nearest of the star clusters, which explains why so many of the separate stars can be seen. At a distance of 130 light-years, the Hyades members travel through space like a flock of geese in the general direction of the star Betelgeuse, in Orion, while receding from us at 100,000 mph (160,000 km/h). Aldebaran is moving toward the south, almost at right angles to the cluster's motion, and twice as fast. Taurus' V-shaped head is, therefore, going to pieces. For 25,000 years or more, it will pass for a V, but after 50,000 years, it will be quite out of shape.

As darkness falls over North America on Monday evening, the view of the Hyades will be augmented by the presence of the moon, 58 percent illuminated, just one night past first quarter phase and floating several degrees to the right of Aldebaran.

The moon has always been a prime target for telescope observers everywhere and shows amazing detail in even the smallest telescope. Even binoculars will show the mare ("seas"), mountain ranges and ringed plains, as well as the great craters — and with a telescope of only 3-inch aperture, you can see practically everything as clear as in the very best Earth-based photos. Most observers agree that the very best time to view the moon is in the two- or three-day interval following first quarter. That's when the moon is in a good position for evening study, with most of its major features visible, while not overly bright (as is the case at full phase) to cause a loss of detail through glare. The best views are along the sharp sunrise line separating darkness from light, called the terminator. Through a telescope, features near the terminator stand out in bold relief; shadows are strong, and details are more easily seen. Sometimes, you can even notice bright specks of light where high mountains catch the light of the rising sun before it has reached the plains below. [Earth's Moon Phases, Monthly Lunar Cycles (Infographic)]

If you're using binoculars, take note how, as the night progresses, the moon shifts — at its own apparent diameter each hour — past the fourth-magnitude star Gamma Tauri, located at the bottom of the V.

But for some, this will be more than just the moon's close brush with a star.

Tales of the occult

The moon's passage through a cluster of stars like the Hyades can mean that one or more stars are hidden by the moon (astronomers call this an occultation). Gamma Tauri is one of those prospective candidates. Indeed, the moon will occult it for parts of the northeastern U.S., northeastern Canada and Greenland.

Then, there's a close pair of stars, Theta 1 and Theta 2 Tauri, which will undergo occultations for a swath of the northern U.S. and Canada, as well as Alaska.

And finally, in what certainly will prove to be the best stellar eclipse of all, Aldebaran will put on a disappearing act for those in Hawaii.

In all of these cases, the stars will disappear behind the moon's dark limb and reappear on the bright limb. When they disappear, there will be no gradual fading; rather, the star will suddenly and rather abruptly "pop off" as if a switch were flipped. Similarly, the star will "pop back on" when it reappears.

"The spectacle, reported on paper, does not sound as arresting as it is in nature," noted the late H.A. Rey in his classic book, "The Stars — A New Way to See Them" (Houghton Mifflin, 1952), adding, "It is well worth watching.”

Thanks to the International Occultation Timing Association (IOTA), we provide links for the local viewing circumstances of the four stars listed above. Each page provides a map showing the zone of visibility of the occultation, as well as listings of the times for the disappearance and reappearance of the selected star for hundreds of locations, including Canada (denoted by "CA") and the United States (denoted by "US"). All times are in Universal Time (UT). Subtract 5 hours to convert to Eastern time, 6 hours for Central time, 7 hours for Mountain time and 8 hours for Pacific time.