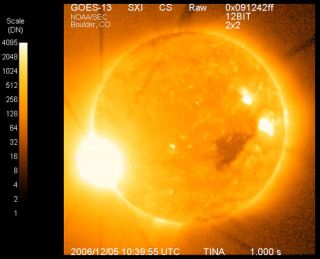 The Sun is just past its low-point in an 11-year cycle of activity. But big eruptions can happen anytime.

A major X-9 flare erupted this morning [image]. It emanated from a large sunspot, numbered 929, which is just coming into view around the eastern limb of the Sun.

The flare lifted off the Sun at 5:35 a.m. ET. It was directed away from Earth. But this sunspot will rotate toward the center of the Sun over the next few days and could offer up more major blasts that could take direct aim at our planet, forecasters say.

Flares of this magnitude (X-class flares are all major) can damage satellites and disrupt telecommunications on Earth. They can also threaten astronauts in space. NASA sometimes orders astronauts aboard the International Space Station to retreat to the most well-protected part of the orbiting outpost to avoid excess radiation exposure. Spacewalks are avoided during solar storms.

NASA plans to launch the Space Shuttle Discovery toward the International Space Station on Thursday (the bright glare of the rocket will be visible from much of the eastern United States). NASA spokesperson Lynette Madison said the solar flare is not expected to affect the launch in any way.

"It wasn't on my radar, and it's obviously not on the radar of the headquarter folks either," Madison told SPACE.com.

Another spokesperson, William Jeffs, wrote in an email that one of his scientists told him: "The solar flare was an X-ray solar flare pointed away from Earth and therefore not an issue for ISS. To be an issue it would have to be a large proton solar event pointed to Earth."

Sunspots are dark regions of the Sun where intense magnetic activity caps the upwelling of material from below. Sometimes a cap blows, and a visible flare results. The flares are loaded with X-rays and other radiation, all of which reaches Earth moments after the eruption and can be accompanied by a shower of protons. These storms can arrive in moments with little warning and can be deadly.

Many flares are accompanied by clouds of electrified gas called coronal mass ejections, which can slam Earth a day or so later.

Earth is somewhat shielded from solar storms, but some of the radiation leaks through our protective magnetic field. Experts say space radiation is one of the biggest threats to current and future space missions, including the effort to establish a lunar based as detailed yesterday by NASA.

"We have no concerns that future flares might pose a threat to spacewalks because they are timed when we have protection from the Earth's magnetic field," said Francis Cucinotta NASA Chief Scientist with the Space Radiation Program Element.

SPACE.com's Ker Than contributed to this story from Houston.