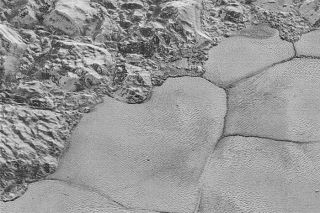 This high-resolution image from New Horizons shows the “shoreline” of Sputnik Planum on Pluto.
(Image: © NASA/JHUAPL/SWRI)

Pictures are still filtering back from NASA’s New Horizons close-up of Pluto last year and one of the biggest surprises so far comes from the region informally known as Sputnik Planum. There’s a lack of craters on its surface, making it a unique area on Pluto and a rare spot in the solar system — it turns out it could be very young terrain indeed.

“What I did was take the pictures that we have seen — the amazing pictures! — and calculate, based on Pluto’s orbital environment, what the impact rate and therefore the surface age of Sputnik Planum must be,” wrote planetary scientist David Trilling in an email to Discovery News.

“There have been lots of press releases describing various aspects of Sputnik Planum, but, as far as I know, this is the first time that the age estimate of 10 million years or younger appears in the peer-reviewed literature,” added Trilling, an assistant professor of physics and astronomy at Northern Arizona University.

Trilling’s study, which is in press at PLOS One, mentions three ways the resurfacing could take place:

As for where the meteorites are coming from, Trilling points out that Pluto is in a zone filled with smaller Kuiper Belt objects. From time to time, these small bodies crash into Pluto. Trilling’s math shows that this happens roughly every 10 million years, which would explain why Sputnik Planum appears so young.

Trilling’s research is mostly focused on near-Earth asteroids, but Pluto caught his attention not only because of the “astounding” images, but also the lack of craters. He’s also hopeful that New Horizons will be funded to look at another Kuiper Belt object up close in 2018. If that happens, Trilling will be on the lookout for more “crater-free patches” to nail down more information about the solar system’s evolution.