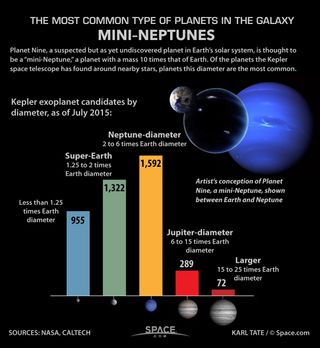 On Jan. 20, 2016, scientists announced the discovery of what could be a giant planet in the Kuiper Belt at the outer edge of our solar system. Nicknamed "Planet Nine," the world about 10 times the mass of the Earth and would take between 10,000 and 20,000 years to orbit the sun. Such mini-Neptunes may actually outnumber most other planets in our galaxy, scientists say.

Discovery Story: 'Planet Nine' May Exist: New Evidence for Another World in Our Solar System

The Evidence for 'Planet Nine' in Our Solar System (Gallery)