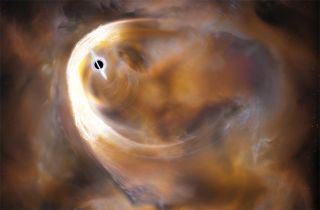 This artist's impression shows the swirling gases surrounding an "invisible object" at the center of CO-0.40-0.22.
(Image: © Keio University/NOAJ)

Astronomers have detected what could be the second most massive black hole in our galaxy and it may be the missing piece of a cosmic puzzle.

ANALYSIS: Why Is This 'Naked' Black Hole on a Crash Diet?

Using the Nobeyama 45-meter Radio Telescope, which is managed by the National Astronomical Observatory of Japan (NAOJ), the researchers found the object only 200 light-years from the Milky Way's supermassive black hole Sagittarius A* (Sgr. A*). By tracking the emissions from a swirling gas cloud called "CO-0.40-0.22," they found a "surprisingly wide velocity dispersion" — in other words, this cloud of gas is composed of material that is swirling at a wide range of speeds. There appears to be no supernova activity or any other energetic event in the region that could be driving this bizarre phenomenon.

Using computer models, the researchers were able to deduce that an extremely compact object — in other words, a black hole — lives in the "eye" of this interstellar storm and it must be massive. And by "massive" they mean in the order of 100,000 solar masses-massive. If confirmed, this would make the invisible object at the core of CO-0.40-0.22 a so-called "intermediate-mass" black hole, second in mass only to mighty Sgr. A* itself. Sgr. A* "weighs in" at a staggering 4 million solar masses.

"Considering the fact that no compact objects are seen in X-ray or infrared observations, as far as we know, the best candidate for the compact massive object is a black hole," said Tomoharu Oka, of Keio University in Japan and lead author of a study published in the Astrophysical Journal.

So that leaves us with a puzzle. Are intermediate-mass black holes simply hard to find? Or are they incredibly rare? The first question may be solved through improved detection techniques, but the second question poses a challenge to black hole evolution theories and could expose a huge flaw in our astrophysical thinking.

Some theories of galactic evolution suggest the Milky Way should contain 100 million black holes, but X-ray surveys have only turned up a tiny fraction of this number. This is where radio telescopes may fill a niche in seeking out "invisible" mid-sized black holes.

"Investigations of gas motion with radio telescopes may provide a complementary way to search for dark black holes" said Oka in a press release. "The on-going wide area survey observations of the Milky Way with the Nobeyama 45-m Telescope and high-resolution observations of nearby galaxies using the Atacama Large Millimeter/submillimeter Array (ALMA) have the potential to increase the number of black hole candidates dramatically."

The location of CO-0.40-0.22 is also intriguing; should our black hole merger evolution model hold true for the growth of black holes on their way to becoming supermassive, there should be a concentration of massive black holes near galactic cores. As this candidate is only 200 light-years from Sgr. A*, it could indicate that, eventually, the object in CO-0.40-0.22 will eventually stray near Sgr. A* to add to its already impressive bulk.