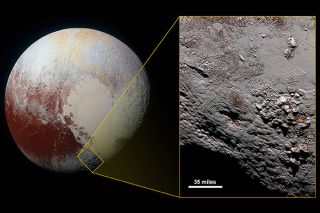 This observation shows the candidate cryovolcano Wright Mons taken by the New Horizons spacecraft’s Long Range Reconnaissance Imager (LORRI) on July 14, 2015. Color has been enhanced by data from the Ralph/Multispectral Visible Imaging Camera (MVIC), from a range of 21,000 miles (34,000 kilometers) and at a resolution of about 2,100 feet (650 meters) per pixel. The entire scene is 140 miles (230 kilometers) across.
(Image: © NASA/JHUAPL/SWRI)

Pluto’s weirdly dynamic and “young” surface has just become even more intriguing with the release of this stunning color image of what is thought to be a huge cryovolcano, or ice volcano.

As the dwarf planet is so far away from the sun, it was assumed, before the historic New Horizons Pluto flyby in July, that it would be a frozen, static and crater-filled world. But as observations by the NASA spacecraft are showing us, Pluto has an astonishing impact crater-less surface, with some regions dominated by dynamical atmospheric and surface processes.

Pluto may be cold, but even ices in the Kuiper Belt are slowly moving, even setting up their own “lava lamp”-like convection flows. It is also hypothesized that through the heating of ices inside Pluto’s crust, melted volatiles (like water or methane) will erupt to the surface, much like molten rock erupts from the core of our planet to form volcanoes.

Now, with the discovery of this 2.5 mile-high mountain on Pluto’s surface, planetary scientists are trying to understand how the 90 miles-wide feature formed and whether it could be yet another sign of the small world’s surprising dynamism and a striking example of cryovolcanism.

Informally named “Wright Mons,” should this huge feature indeed be confirmed to be a cryovolcano it will be the largest such example in the outer solar system. (The inner solar system, of course, is dominated by the Martian mega-volcano Olympus Mons that pushes above the Red Planet’s atmosphere, towering 16 miles high.)

Of particular interest in this color image of Wright Mons is the distribution of red material — why isn’t it more widespread around Pluto’s globe? Also, there appears to be few impact craters around Wright Mons, in fact, there is only one impact crater on the mountain itself. This tells us that if it really is an ice volcano, it had to have been active in recent geological history — if it was an inactive, static artifact, it should be peppered with impact craters. Instead, it appears recently active processes — possibly related to Pluto’s ice — have eroded most of the impact craters away.

In short, Pluto is telling us a story through its surprisingly active geologic processes, processes that few scientists would have bet on existing in the outermost reaches of the solar system before New Horizons' dwarf planet encounter.