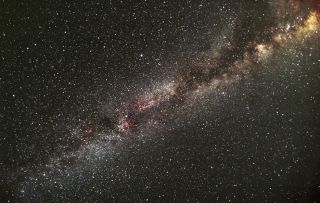 A portion of the Milky Way galaxy, seen by NASA's Kepler Space Telescope. A new study shows that ripples in the edge of the galaxy were caused by dark matter.
(Image: © NASA/Carter Roberts)

Dark matter has been making waves in science for years, but apparently it's been making ripples in the Milky Way for even longer.

New research reveals that dark matter may be responsible for creating waves observed at the outer edges of the galaxy. The ripples were created as a dwarf galaxy containing dark matter zoomed by the Milky Way, scientists say. A model of this interaction can be seen in this new video released last week, The traces of these galactic quakes in the Milky Way may provide a new way to study dark matter.

"One of the fundamental problems in modern cosmology is to characterize dark matter. This is now giving us a way forward," Sukanya Chakrabarti of the Rochester Institute of Technology said at a press conference Thursday (Jan. 7) at the 227th annual meeting of the American Astronomical Society in Kissimmee, Florida. [Stunning Photos of Our Milky Way Galaxy (Gallery)]

Chakrabarti and her team used ripples at the edge of the Milky Way to identify and measure the mass of dark matter-laden dwarf galaxy that raised them. The study of small galaxy "quakes" and the objects that cause them is being called galactoseismology, Chakrabarti said in a press release.

"Much in the same way as seismologists analyze earthquakes to map out the Earth's interior, we should be able to analyze the observed disturbances in galactic disks to map out the unseen material of galaxies and explore their dark-matter content," Chakrabarti said.

Nearly a decade ago, Chakrabarti decided to try and determine just how massive a dwarf galaxy would have to be to raise the puzzling ripples that had already been spotted at the edge of the Milky Way. She estimated that a dwarf galaxy would have to lie about 300,000 light-years from the galactic center, and she began to search for a group of stars on a route along the plane of the galaxy that matched her and her colleagues' predictions. In the area where they were looking, they found a trio of bright objects known as Cepheid variables, whose standardized brightness makes them a standard measuring stick for calculating distances in the universe.

Using the Gemini Observatory, the Magellan Telescope and Wide Field Spectrograph (WiFeS) in Australia, the team members not only measured the distance to the object that they suspected was responsible for the ripples, known as the Norma dwarf galaxy, they were also able to calculate its speed.

"We determined that these stars are racing away from our galaxy at about 450,000 miles (725,000 kilometers) per hour," Chakrabarti said.

"This thing is really zipping by as it perturbs our galaxy," Chakrabarti said.

Her research has been submitted to the Astrophysical Journal Letters.

While most of the nearby dwarf galaxies orbit the Milky Way, the Norma dwarf galaxy is flying away from it. As Norma buzzed the edge of the Milky Way, its enormous mass warped the outer edge of Earth's home galaxy, raising waves that tend to dissipate with time. These waves suggest a recent brush with a dwarf galaxy, as well as ruling out interactions with nearby galaxies, which would have smoothed out over time.

The Milky Way isn't the only galaxy with strange ripples at its outskirts. The Whirlpool Galaxy, also known as M51, has large spiral perturbations in its disk. According to Chakrabarti, of the roughly 40 galaxies that have had maps made of their atomic hydrogen, where the ripples are visible, "many of them show perturbations."

Studying the ripples in these galaxies using the same methods used in the Milky Way can help identify not only nearby, previously unseen satellites, but also those surrounding other large galaxies.

"We should be able to map out the unseen material of galaxies that is their dark matter content using the observed disturbances in galactic disks," said Chakrabarti.

If that's the case, the newfound Norma dwarf galaxy may be the first of several galaxies to measure how much dark matter they contain dark matter measurements taken due to interactions with their neighbors.

"My hope is that this is the first example of a new field of galactic seismology," Chakrabarti said.