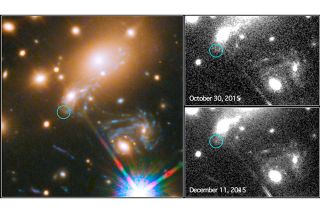 This Hubble image shows the supernova's signal appearing in the Einstein Cross as predicted by astronomers.
(Image: © NASA & ESA and P. Kelly (University of California, Berkeley))

An ancient supernova that was serendipitously captured in four Hubble space telescope images thanks to a naturally occurring cosmic magnifying lens has reappeared, as astronomers predicted.

The exploded star, known as Refsdal in honor of Norwegian astronomer Sjur Refsdal, first appeared in November 2014. Scientists were stunned to find four images of the supernova around a galaxy, a configuration known as an “Einstein Cross.”

The multiple images were caused by light from the supernova, which exploded about 10 billion years ago, taking different paths around a gravitationally warped region of space, relative to Hubble’s line of sight.

These warped regions are due to massive galaxy clusters bending space and time, a phenomenon predicted by Albert Einstein 100 years ago.

The four supernova images captured by Hubble appeared within a few weeks of each other in November 2014. Scientists predicted the lensed region of space would cause additional images of the supernova to appear sometime in the next five years.  They found it on Dec. 11.

“We used seven different models of the cluster to calculate when and where the supernova was going to appear in the future. Remarkably, all seven models predicted approximately the same time frame.” physicist Tommaso Treu, with the University of California at Los Angeles, said in a statement.