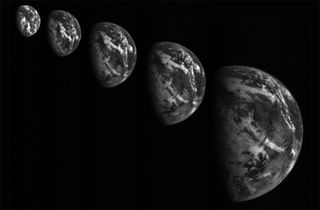 Earth gets bigger in the window during these successive images taken by the Hayabusa 2 spacecraft during its close approach.
(Image: © JAXA)

One year to the day after lifting off, the Japanese spacecraft Hayabusa2 paid its home planet a quick visit for a speed-boost. During its closest approach on Dec. 3, the asteroid-seeking spacecraft took several stunning pictures of Earth.

The spacecraft snapped several images using its wide-angle ONC-W2 camera. It's roughly nine hours between the time of the first image and the time of the last image above. Hayabusa2 did execute its flyby maneuver, but it will take a few days before controllers know if it is moving in the right direction.

Its ultimate goal is to reach the asteroid Ryugu in 2018 and literally scoop out some secrets of the early solar system. Hayabusa2 will deploy several landers (some stationary, some more bouncy) and then will swoop in itself to grab a sample off the surface. It will then return that sample to Earth in 2020.

The pictures flowing from Hayabusa2 started coming again in late November, when the spacecraft captured the neat photo above showing the Earth and the moon in a single frame. This is a point of view that has only occurred a handful of times in spaceflight history, such as in pictures from the Galileo and Juno spacecraft during their closest approaches to Earth.

NEWS: Japanese Asteroid Probe to Fish for Ingredients of Life

Hayabusa2 made the close encounter to get a speed boost for its journey to the asteroid. It's a common technique used by spacecraft to save on fuel and weight. Perhaps the most famous example of this was the two Voyager spacecraft, who took advantage of a rare alignment of the outer planets to visit Jupiter, Saturn, Uranus and Neptune in one go.

The spacecraft is a follow-on from the Hayabusa mission, which returned to Earth in 2010 with samples of asteroid Itokawa. Ryugu, however, is expected to have more "hydrated" minerals on its surface than Itokawa. So visiting the asteroid could add to the picture of how water was born and spread in our solar system.

Hayabusa2 isn't the only spacecraft out there gathering information about our solar system's origins. The European Rosetta mission is still at Comet 67P/Churyumov–Gerasimenko to see how the comet changes as its whizzes out from its closest approach to the sun. Among the mission's major findings was discovering the type of water found on the comet differs from the water on our own planet.

NEWS: The Pale Blue Dot: Here's Looking At Us, Earthlings

NASA's New Horizons spacecraft is speeding away from Pluto right now with a treasure trove of images it slowly is sending back to Earth. It's possible, but not guaranteed, that it could fly past and study an icy Kuiper Belt object far out in the solar system. Like comets and asteroids, these objects are small and likely look like how the solar system used to early in its ancient history.

We also can't forget the number of telescopes looking at exoplanets and trying to make comparisons to our own solar system. The Kepler spacecraft has found thousands of candidates so far and is still going strong despite a major mechanical failure that forced a change in its mission. Just recently, more than 200 new candidates were announced in a peer-reviewed study.