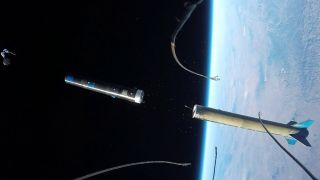 Nose-fairing camera view of an UP Aerospace booster separating in space and ejecting the Maraia capsule on Nov. 6, 2015.
(Image: © UP Aerospace)

The rocket, built by Denver-based UP Aerospace, launched Sunday (Nov. 6) from Spaceport America in New Mexico carrying four separate payloads, including a capsule called Maraia that NASA is developing to return science gear from the International Space Station to Earth. You can watch an amazing video of the rocket launch and Maraia deployment, courtesy of UP Aerospace.

The video includes footage of the rocket — which reached a maximum altitude of 75 miles (120 kilometers) — separating from the Maraia capsule, and then the capsule returning to Earth. The cameras were mounted on the launch vehicle and in the rocket's nose fairing. [Photos: NASA's Amazing Small Rocket Launches of 2015]

The flight demonstrated that UP Aerospace's rocket can eject separate payloads and have them soft-land back on Earth using parachutes, NASA officials said. This capability is an important part of making future launch systems more reusable, they added. (The tests were funded via NASA's Flight Opportunities Program.)

The rocket's other payloads, in addition to Maraia, included the Affordable Vehicle Avionics project. This effort, which is led by NASA's Ames Research Center in Moffett Field, California, aims to verify that new spacecraft-control systems work as advertised. The plan is to adapt the new systems to tiny space vehicles such as cubesats, resulting in big cost savings, NASA officials said.

A team from Purdue University also tested a new "green" propellant on the Nov. 6 flight. The rocket industry is interested in using less toxic alternatives to conventional fuels such as hydrazine, and the Purdue researchers captured video of their fuel to see how it behaves in the near-weightless environment of space.

Meanwhile, New Mexico State University scientists ran a test of an algorithm in near-zero gravity that will help onboard computers judge how to optimize fuel usage depending on a spacecraft's mass in space.

"We had a great launch; all the payloads were exposed to the relevant environments that the researchers were seeking," Paul De Leon, NASA Flight Opportunities Program campaign manager, said in a statement. "The new payload deployment capability from UP Aerospace was successfully demonstrated, opening the opportunity for future entry, descent and landing technologies to be tested and matured under Flight Opportunities."

The Flight Opportunities Program funds private-sector development of new space technologies, by paying for some of the launch costs.