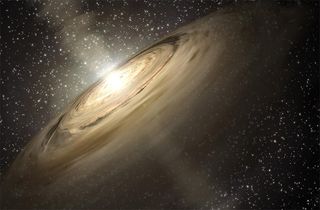 Dusty disks, like the one shown here circling the star, are the breeding grounds of planets. When visible or near-infrared observations show a gap in a disk like this, it is often interpreted as evidence for an unseen planet. However, new research shows that a gap could be a sort of cosmic illusion and not the sign of a hidden planet after all.
(Image: © NASA/JPL-Caltech/T. Pyle (SSC))

Recent observations of the gaps in protoplanetary disks surrounding nearby young stars may not be “proof” of the formation of exoplanets. Instead, it could be that these apparently “empty” bands contain larger debris that scatter starlight at different frequencies.

As optical techniques improve to study the environment directly surrounding stars, astronomers have begun to study dusty protoplanetary disks. Often these disks possess gaps — much like Saturn’s “Cassini Division” in its rings — a feature that is often cited by astronomers as possible evidence for the presence of an unseen proto-exoplanet vacuuming up the debris as it orbits the star.

Although this may be indeed true for some “empty” bands in protoplanetary disks, a new study published in the Astrophysical Journal Letters suggests many may not actually be empty at all, but filled with larger particles or pebble-sized rocks, lacking the smaller dust particles that efficiently scatter starlight at certain frequencies. Lacking this dust, these bands seem empty and the larger debris rendered invisible at certain wavelengths.

“If we don’t see light scattered from the disk, it doesn’t necessarily mean that nothing is there,” said Til Birnstiel, lead author of the study from the Max Planck Institute for Astronomy in Germany, in a news release.

When studying protoplanetary disks in visible or near-infrared light, observatories are seeing light that is being reflected or scattered from tiny dust particles of the approximate size of cigarette smoke particles.

However, as predicted by planetary formation models, the material inside protoplanetary disks clumps together over time, gradually forming bigger and bigger particles, eventually forming asteroids and protoplanets. But before a large exoplanet forms from the dusty material, there is likely an intermediate stage where bands that appear devoid of material form, but are in fact filled with larger debris that scatters and reflects starlight in a different way, making them appear cloaked at certain wavelengths. In some stellar environments, these particles may not form exoplanets at all, instead becoming sheared apart through a never-ending jostling of material.

“Growth, migration and destruction can have tangible, observable effects,” said co-author Sean Andrews of the Harvard-Smithsonian Center for Astrophysics (CfA), Mass. “Specifically, these processes can create an apparent gap in the disk when the small particles that scatter light are cleared away, even though larger particles still remain.”

The researchers suggest viewing banded protoplanetary disks in longer wavelengths in the hope of seeing whether or not those bands that appear empty are actually chock-full of larger debris like pebbles.

To test this idea, the researchers are going to use the Atacama Large Millimeter/submillimeter Array (ALMA), located in Chile’s Atacama Desert, to stare at the star TW Hydrae. TW Hydrae is a well known young star sporting a banded protoplanetary disk, located around 176 light-years away. Should this observation campaign pick up a signal from the star’s famous gap (which is often cited as the “smoking gun” of the presence of an unseen exoplanet), it could be that there is no exoplanet, and this band is just filled with larger pieces of debris than the rest of the dusty disk.

But if the ALMA observations still reveal an apparently empty band, perhaps there really is an exoplanet lurking around TW Hydrae.