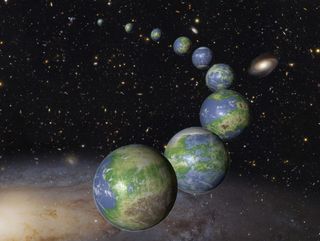 An artist's impression shows innumerable Earth-like planets to come into existence over the next trillion years in the universe.
(Image: © NASA, ESA, and G. Bacon (STScI))

This question forms the basis of the Fermi Paradox: given the age of the universe and the apparent high probability of life evolving on other planets orbiting other stars, where are all the smart aliens?

According to a new study based on data collected by the NASA/ESA Hubble Space Telescope and NASA's Kepler Space Telescope, it might be that Earth (and all life on it) is an early bloomer. By extension, the logical progression from this new study is that we're not hearing from advanced alien civilizations because, in short, the universe hasn't had the time to spawn many more habitable worlds.

The study, which focuses purely on the likelihood of the evolution of habitable worlds (and not speculation of alien intelligence, the Fermi Paradox implication is my own), finds that when our planet was born from our young sun's protoplanetary disk some 4.6 billion years ago, it was born into an era when only "8 percent of the potentially habitable planets that will ever form in the universe existed." This means that the universe has 92 percent to go until it runs out of the necessary material to produce the stars that go on to produce planets, some of which will be small and rocky and orbit in just the right location for life (as we know it) to thrive.

"Our main motivation was understanding the Earth's place in the context of the rest of the universe," said Peter Behroozi of the Space Telescope Science Institute (STScI) in Baltimore, Md., "Compared to all the planets that will ever form in the universe, the Earth is actually quite early."

Hubble has shown astronomers that young galaxies were churning out stars at a fast rate some 10 billion years ago. However, the quantity of hydrogen and helium involved in stellar production was low compared with the amount of these star-forming gases that exist today.

"There is enough remaining material (after the Big Bang) to produce even more planets in the future, in the Milky Way and beyond," said Molly Peeples, also of STScI.

By combining this knowledge from Hubble with exoplanetary data from Kepler, the researchers were able to form a picture of the habitable planet potential of our galaxy and use it as a model for the number of other habitable worlds existing throughout the cosmos.

Since Kepler started taking data in 2009, we've been introduced to a menagerie of small rocky worlds orbiting sun-like stars. Some of these thousands of worlds orbit their stars within the habitable zone — the region surrounding a star that's not too hot and not too cold to allow liquid water to persist on its surface. By extrapolating from Kepler's comparatively small dataset, astronomers have predicted that there should be around 1 billion Earth-sized worlds orbiting within their stars' habitable zones in the Milky Way. If we consider there are 100 billion galaxies in the observable universe, there's a huge number of habitable, Earth-sized worlds throughout the cosmos.

And the universe, according to this new theoretical study, has only just started in the planetary production business. The last star isn't expected to fizzle out for another 100 trillion years (when the universe will continue toward its perpetual march to "heat death"), so there's lots of time left.

With the help of these observations, the researchers predict that Earth 2.0 (i.e. rocky planets of Earth-like dimensions orbiting within their stars' habitable zones) will most likely pop up inside giant galaxy clusters or dwarf galaxies where reservoirs of star-forming (and therefore planet-forming) gases are known to reside. Alas, the Milky Way's planet-forming days are numbered, as much of these gases have already been consumed during our galaxy's heady "starburst" days.

Noted by the researchers is that the advantage of being an "early" civilization evolving at this time of universal evolution is that we have the awesome opportunity to study the early stages of cosmic evolution, using space telescopes (such as Hubble) to see the early formation of galaxies and witness observable evidence for the Big Bang. For any future civilization in a trillion years time, the universe will look very different than it does now — fewer galaxies will be visible and the earliest evidence for the Big Bang (such as the cosmic microwave background radiation) will have further ebbed away.

It's interesting to ponder how an intelligent alien civilization will interpret a more mature, perpetually expanding universe lacking the cues to its origin that we take for granted today. Would they assume, lacking contradictory evidence, that the universe has always existed? And that just because the universe is expanding, it doesn't mean there had to be a Big Bang?

ANALYSIS: A Mathematical Twist on the Fermi Paradox

Of course, this is just a fun thought experiment; predicting the existence of a future alien intelligence, let alone how they may interpret their cosmic environment, is presumptuous at best. But it does pose an existential problem beyond the Fermi Paradox. If the Earth is an early bloomer, and humanity is one of the first intelligent civilizations to pop up in a universe of infinite possibilities, how might our civilization unfold?

Who knows, but it seems the universe has the boundless potential to form new worlds and new life (and new intelligences) that will potentially form long after humanity and life on Earth has come and gone, eventually succumbing to the inevitable death of our sun in about 5 billion years time. This study serves to remind us that our time as an intelligent life form in the universe is fleeting, and it seems many more intelligences will evolve long after we are gone.