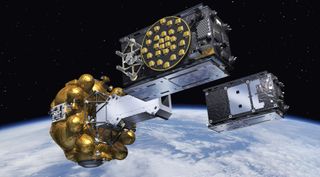 The Sept. 10 launch from Europe's Guiana Space Center on the northeast coast of South America and subsequent Sept. 11 release into orbit brings to 10 the number of Galileo navigation satellites deployed, with 20 more to go to complete the system by 2020. Assuming the December launch occurs as scheduled, the Galileo system will have 12 functioning spacecraft in orbit by early 2016.

The European Space Agency, which is managing Galileo's development on behalf of the European Commission, plans to launch four more Galileo satellites in late 2016 aboard a heavy-lift Ariane 5 rocket once a purpose-built adapter carrying the four Galileo spacecraft has been validated. Work on the adapter is scheduled for completion by next spring.

In a press briefing before the launch, ESA Navigation Director Didier Faivre said OHB SE of Bremen, Germany, which is building 22 Galileo satellites, has demonstrated its ability to deliver satellites at the forecast rate.

The Ariane 5 launch in 2016 will be the sole Galileo launch that year. In 2017, one Ariane 5 and one Europeanized Soyuz will carry a total of six Galileo satellites. In 2018, the last of the current batch of OHB-built satellites will launch aboard the third and final Ariane 5 rocket contracted for the work.

With four in-orbit-validation (IOV) satellites also in orbit, and despite the fact that one cannot fully function because of a power glitch, ESA and the European Commission will have 26 satellites at their disposal by 2018.

Paul Flament, a Galileo manager at the European Commission, told the briefing that the commission expects to be ordering at least four more satellites in the coming months, in time to have them launched an in service by 2020.

"Mathematically, an order of four satellites would be enough" to complete the 30-satellite constellation, Flament said. "But there is a problem with one of the IOV so we may want to order more than four. I cannot give you a precise figure yet."

Apparently still undecided is whether the commission will order four more spacecraft from OHB, which would reduce the cost of the new contract, or will open a fresh competition likely to include Airbus Defence and Space and Thales Alenia Space in the bidding process.

European government and industry officials have said they may wish to use the next Galileo satellite order as a way of introducing elements of a second-generation system. Doing so would also make it more likely that OHB will have competition in future Galileo satellite orders. Dual sourcing of suppliers is a European Commission goal.

Faivre and Javier Benedicto, ESA’s Galileo project manager, said during the briefing that the two Galileo satellites launched into a bad orbit following a defect in the Soyuz rocket’s Fregat upper stage have been maneuvered into a position that allows their use in the overall Galileo constellation.

A relatively modest adjustment to the Galileo ground network will be needed to accommodate the unplanned orbit, but otherwise the satellites will be able to provide the planned navigation and search-and-rescue signals.

As a result of the August problem, the European Commission decided that, starting with the most recent launch, it will insure the launch of all future Galileo satellites. It is rare, although not unprecedented, for governments to insure their space launches.

The Sept. 11 launch placed the two Galileo satellites into a near-circular orbit with an altitude of 29,930 kilometers — the satellites will be lowered into their final operating orbit in the coming days — and an inclination of 57.4 degrees relative to the equator.