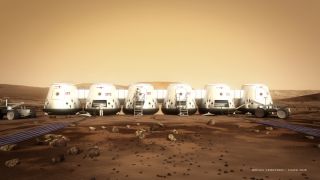 The Björn Borg fashion brand's upcoming Spring/Summer 2016 (SS16) show is a tribute to Mars One, a privately funded project that aims to land four people on the Red Planet in 2027 as the vanguard of a permanent colony.

The "SS16 show finds its inspiration in the love of mankind. Inspired by the project Mars One, we are making a tribute to the courage and the faith that these people show by going out to the unknown for the evolution of mankind," James Lee, head of design at Björn Borg, said in a statement. [Images of Mars One's Red Planet Colony Project]

"We are showing a strong fashion sportswear collection and confidently take on the ultimate challenge — training for Mars," Lee added.

Mars One is a nonprofit organization based in the Netherlands. In 2020, the group plans to launch an unmanned Mars lander to test out some of the technologies required for crewed missions, as well as a communications satellite that will set up shop in orbit around the Red Planet.

Additional robotic missions that lift off in 2022 and 2024 will continue to prepare the Martian ground for the arrival of the first astronauts, in 2027. If all goes according to plan, additional crewmembers will join these pioneers every two years. Mars One intends to pay the majority of the costs associated with these activities by staging a global media event around the process, from astronaut selection through the colonists' time on the Red Planet.

There are no plans to bring the Mars settlers back to Earth at the moment. But many people applied to become Mars One astronauts nonetheless — more than 200,000, according to representatives of the organization.

That initial applicant pool has been whittled down to 100 finalists, from which 24 Mars One astronauts will eventually be selected.

"Our candidates are modern-day explorers that are willing to accept the risks associated with going to Mars in order to live their dreams," Mars One co-founder and CEO Bas Lansdorp said in the same statement. "It will be an adventure that takes courage, skills and perseverance. We are extremely proud that our mission inspired Björn Borg for their upcoming fashion show."

The Björn Borg brand takes its name from the Swedish former tennis great. The brand sells products, the most prominent of which is underwear, online and via stores in a number of markets, most of them in Europe.