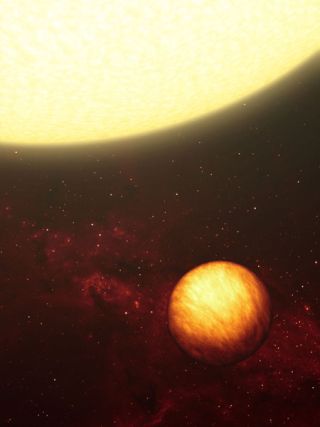 An artist's illustration of a Jupiter-like planet soaking up the scorching rays of its nearby sun. Spitzer observations suggest one side of Upsilon Andromeda b is perpetually in cold dark, while the other is forever blistering under the heat of its star.
(Image: © NASA/JPL-Caltech)

The poet Robert Frost wondered if Earth would wind up a world of fire or ice. Astronomers have discovered that a distant planet is both.

With one side always hot as lava and the other chilled possibly below freezing, Upsilon Andromeda b is a giant gas planet [image] that orbits extremely close to Upsilon Andromeda, a star 40 light-years from our solar system in the constellation Andromeda.

"If you were moving across the planet from the night side to the day side, the temperature jump would be equivalent to leaping into a volcano," said study leader Brad Hansen of the University of California, Los Angeles.

Upsilon Andromeda b was discovered in 1996. It is what's known as a "hot-Jupiter," a gas giant circles its star in a very tight orbit, in this case 4.6 days. Two other planets also circle Upsilon Andromeda, but farther out.

The new finding, detailed online in the journal Science, marks the first time any kind of temperature variation has been seen across the surface of a planet outside our solar system.

Using infrared data collected by NASA's Spitzer Space Telescope, the researchers calculated that temperatures on the sunlit side of the Upsilon Andromeda b were between 2,550 to 3,000 degrees Fahrenheit (1,400 to 1,650 degrees Celsius) but only minus 4 to 450 degrees Fahrenheit (-20 to 230 degrees Celsius) on the dark side. Jupiter, in contrast, maintains an even temperature all around.

Spitzer made infrared measurements of the planet at five different points during its orbit and found that its light levels went up and down, depending on whether its sunlit or dark side was facing Earth. From this data, astronomers calculated the temperature difference between the two sides.

"If the planet had just one equilibrium temperature, then all we would get would be a flat line," Hansen explained in a telephone interview.

The findings likely apply to other hot-Jupiters as well, the researchers say.

"This observation completely changes our thinking about hot gas giant exoplanets," said study team member Sara Seager of the Carnegie Institution of Washington. "Most astronomers expected them to be more uniformly heated, much like Jupiter. But this planet clearly has a hot side and a cool side."

However, it's possible that Upsilon Andromeda's larger-than-average size has something to do with it, Hansen said. The star around which this planet orbits is slightly hotter and a little bit more massive than the Sun, he said.  "How much that has an effect we don't really know."