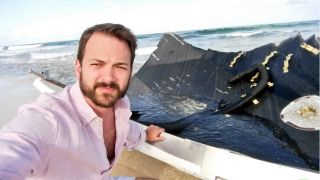 If you found part of a SpaceX Falcon 9 rocket just sitting on the beach, you'd mail it back to Elon Musk, right? That's what Kevin Eichelberger, above, says he decided to do after happening upon the rocket's wreckage in the Bahamas May 29.
(Image: © Kevin Eichelberger)

On May 29, Twitter user Kevin Eichelberger scored what will probably go down as the find of his beach-combing career: the briny, barnacle-encrusted wreckage of a SpaceX Falcon 9 rocket.

Eichelberger, who according to his Twitter bio runs a Charleston, South Carolina-based e-commerce company called Blue Acorn, said he'd mail whatever hardware he could pry off the wreckage back to SpaceX HQ in Hawthorne, California.

Update for June 9: As promised, Eichelberger has sent the GoPro camera data from the SpaceX payload bay fairing back to SpaceX. The company released this spectacular video of the fairing's fall from space earlier this week. According to this SpaceNews report, SpaceX will also retrieve the wreckage from