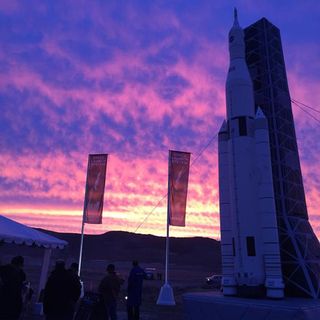 Orbital ATK tweeted this photo of the public viewing site for the qualification motor (QM-1) static test on March 11, 2015.
(Image: © Orbital ATK (via Twitter as @OrbitalATK))

Michael Potter is a senior fellow at the International Institute of Space Commerce. Potter received his MSc degree from the London School of Economics, and he is a graduate of the International Space University. Potter also directed the space documentary film "Orphans of Apollo." He contributed this article to Space.com's Expert Voices: Op-Ed & Insights.

Perhaps the most enduring characteristics of NASA's legendary reputation have been the agency's ability and willingness to embark on extraordinarily difficult challenges, to pursue next-to-impossible journeys and to solve profoundly vexing problems.

But more recently, the agency has drifted from that Apollo-like focus that built its credibility and brand. For example, why does NASA not have any sustained presence on the moon? Why does the United States not have a human-rated rocket? The latest NASA Strategic Plan claims that the International Space Station (ISS) is the centerpiece of NASA's core mission. Yet NASA is planning to crash this $200 billion space structure into the ocean in 2024. In 2025, NASA may end up buying or leasing a replacement station, according to a recent speech by William Gerstenmaier, associate administrator for NASA's Human Exploration and Operations Directorate.

The United States won the space race with the Soviets, but once the U.S. declared victory, we realized that massive, centralized, government space programs were not sustainable.

Is there any strategy in the Strategic Plan?

I recently examined the latest NASA Strategic Plan, and I was disappointed that it hardly resembled a plan at all. It reads and feels like a slick year-in-review annual report from a national charity organization.

The vision statement reads, "We reach for new heights and reveal the unknown for the benefit of humankind." And the mission reads, "Drive advances in science, technology, aeronautics, and space exploration to enhance knowledge, education, innovation, economic vitality, and stewardship of Earth." There are photographs of STEM outreach to schoolkids and lots of interesting "pieces," but there's a lack of a credible coherent vision and mission.

The plan seems vaguely aspirational, and does not seem to reflect the basic political and funding realities of a fragmented Congress battling with the White House, or the competing internal interests perceived by other federal agencies.

The plan is 60 pages long. For a straegic plan to be clear, powerful, credible and executable, it should be concise —no longer than 10 pages. NASA's plan implies that the agency is trying to be all things to all people but is unable to formulate a credible and powerful Grand National Space Strategy. [No Warp Drive Here: NASA Downplays 'Impossible' EM Drive Space Engine ]

The traditional adage of pro-space advocates is to argue, "No bucks, no Buck Rogers." Often, this phrase is invoked to suggest that if NASA were simply given additional billions of dollars in funding, the agency could produce ever more historic results. At this moment in history, I would argue that a compelling Grand National Space Strategy is more important than showering the agency with substantially greater funding or expanding its ever-increasing to-do list.

When U.S. President Barack Obama came to office, he immediately shut down his predecessor George W. Bush's Constellation launcher system for human space exploration, with the intent of lowering cost and, perhaps as important, providing a different vision. In its place, the new administration championed the Space Launch System  (SLS) — or, as some critics refer to it, the "Senate Launch System" — because the administration's Asteroid Redirect Mission (ARM) was considered a flexible path or a flexible architecture that would give NASA the capabilities to carry out a number of possible future mission options, including a lunar mission, when funds became available.

On June 4, 2014, the National Research Council published a 286-page report, the culmination of an 18-month $3.2 million congressionally mandated investigation, arguing that the ARM mission should not be pursued and that NASA should instead go back to human missions to the moon.

In fact, Europe is interested in a moon mission, as are some members of Congress and a number of advocates within various NASA centers. During a Senate Commerce, Science and Transportation Committee hearing about the future of U.S. space exploration in February, both Apollo astronaut Buzz Aldrin and Apollo Lunar Module pilot Walt Cunningham advocated a permanent settlement in space, with the moon providing a critical path. Aldrin is not satisfied with NASA's current strategy, and recently published his plan for a mission to Mars and a call for a "unified space vision" for American space policy.

In the last few weeks, there has been a battle as some members of Congress argue to move funds from NASA's Earth-sciences budget to fund other hardware and human spaceflight priorities. Space Launch Systems would get $500 million more in additional funding than the White House requested, Commercial Crew would receive $246 million less than the White House requested and Earth Sciences would receive $269 million less than the president requested. These annual funding brawls are, in part, indicative of the lack of strategy and consensus in space exploration.

Despite the most recent funding discussions, there is currently no consensus and funding for a human mission to the moon or Mars. There is currently a congressional proposal to make space settlement a national goal, and recently, there has been a congressional suggestion that NASA should be tasked with developing interstellar propulsion. But all of those ideas seem to constitute more of a wish list than any sort of focused strategy.

In the past decade, one of NASA's greatest accomplishments has been the agency's effort to work with Orbital ATK, Boeing, SpaceX and other private spaceflight companies on commercial deliveries of supplies — and, in the future, crewmembers — to the ISS.

However, a central weakness of NASA's current activities and budgets is the tremendous amount of attention on the "last mile" problem — that is, launch vehicles and crew capsules that are helpful within the immediate Earth vicinity, but not cost-efficient nor effective to get robotic systems and crew back and forth to Mars. Without question, there are billions of dollars that can be restructured, redirected and optimized to other areas of NASA activities.

Getting to a Grand Strategy

The ultimate question is whether it is possible to achieve a new Grand National Space Strategy.

There are two ways I see to contemplate such a possibility. One is what I would describe as strategy from above. This might be described as a "Kennedy moment." If a perceived national rival to the United States were to land on the moon and begin mining for a valuable mineral, this could conceivably provide the spark for finally creating a clear strategy from above. Because Congress is both too partisan and too occupied with local jobs in their own districts, perhaps another solution would be for Congress to appoint a space realignment commission that would be charged with trying to synchronize NASA center infrastructure, overheads and assets, and ensure they are consistent with NASA's mission and an overall Grand National Space Strategy. This represents strategy from below.

At this moment in history, there may be a third way to bring back a Grand National Space Strategy. As we prepare for the upcoming presidential elections, this could be an opportunity to create a truly bipartisan, presidential Grand National Space Strategy. This would require a collaborative "tiger team" effort of several Washington, D.C., think tanks, representing views across the political spectrum. These teams would have industry participation and input, and all members would be charged with exploring new government-industry business models.

There has to be a shift away from "business as usual" and cost-plus contracting and acquisition models. Let's develop a template where NASA can be incentivized and allowed to deliver exceptional results off of a platform of respectable, but stable, funding. The tiger team would forge a bipartisan policy for the next president and bring back a powerful, directed, coherent Grand National Space Strategy.

Such a strategy has to be sustainable and scalable. With a rational, credible strategy in place, Congress would then be responsible for long-term, unwavering, consistent funding to achieve it.

On the path to planetary settlement

Personally, I would argue for a near- to midterm robotic settlement of both the moon and Mars. Making humanity a multiplanetary species and planetary defense (protecting the Earth from a major asteroid impact and major cosmic hazards ) also needs to feature centrally in this strategic plan. Robot missions would begin the process of making radiation-hardened habitats and producing other necessities that would be required by the human missions that would follow.

America's space-leadership obituary may be a bit premature. But we don't have unrestricted time to bring NASA back to its well-earned glory and what it does best: embarking on difficult and challenging space journeys.

A return to a Grand National Space Strategy may be a challenging puzzle indeed, but it is achievable. And since it may very well prove to be an important part of the destiny of all humankind, it is worth fighting for.