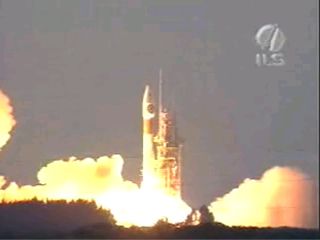 The last Atlas 2 rocket ever to fly launched skyward today, successfully delivering a U.S. reconnaissance satellite into space and ending a chapter in rocket history.

Despite a series of delays, a 15-story Atlas 2AS booster carried the U.S. National Reconnaissance Office satellite (NROL-1) into space during an evening launch from Cape Canaveral Air Force Station in Florida. It was the final launch for the Atlas 2, capping 13 years of service for the Lockheed Martin-built booster with a 100 percent success rate. The flight also marked the last time a rocket would liftoff from pad 36A at Cape Canaveral.

"We look at it not so much as an end, but as a graduation," said International Launch Service (ILS) spokeswoman Fran Slimmer during a telephone interview. Based in McLean, Virginia, ILS marketed the Atlas launch for the National Reconnaissance Office.

A rocky road to space

Today's launch was the fifth attempt in as many days for the classified NROL-1 satellite. Battery concerns with the spacecraft's booster scrubbed its first Aug. 27 attempt, then the inadvertent venting of 10,000 pounds of liquid oxygen fuel led to a second scrub 24 hours later. Poor weather grounded two additional launch attempts before today's space shot.

But at 7:17 p.m. EDT (2317 GMT), the Atlas 2AS rocketed on its last voyage with a Centaur upper stage to boost the NROL-1 into orbit. Spacecraft separation took place on time about 73 minutes after launch.

The space shot was not without glitches. The flight was originally scheduled for 6:49 p.m. EDT (2249 GMT), but pushed back to allow some catch-up time for launch officials and engineers after valve maintenance prompted countdown delays. The delay pushed the launch back to the end of its flight window today, officials said.

As NROL-1 and its Centaur booster entered a 59-minute coast phase 11 minutes into its flight, Lockheed launch conductor Ed Christiansen led the Pad 36A blockhouse in a toast to commemorate the launch pad's retirement.

"Active for 42 years, and the site of 69 launches, Pad 36A retires," Christiansen said during his toast. "At this point, please raise your glasses."

Despite what appeared to be an inauspicious start in May of 1962 - when the first Atlas/Centaur launch vehicle F-1 exploded after liftoff - Pad 36A went on to loft a number of notable missions for NASA. In 1966, the pad saw the launch of and Atlas/Centaur vehicle that carried NASA's Surveyor 1 spacecraft to a soft landing on the moon. The launch pad was also the staging ground for Pioneer 10, the first spacecraft to leave the solar system, which rode an Atlas/Centaur booster combo into space in 1972.

The launch pad never saw a manned flight and turned over for use by the U.S. Air Force in the the 1980s, Christiansen said.

The Atlas 2AS is the third of a rocket trio making up the Atlas 2 launch vehicle family, which also includes the Atlas 2 and Atlas 2A boosters.

Built by Lockheed Martin, the Atlas rocket can trace its history back to the start of the U.S. intercontinental ballistic missile (ICBM) efforts. The rocket was originally designed as the nation's first ICBM system.

Atlas 2AS was the most powerful of its rocket siblings despite their identical 155-foot (47-meter) length, and launched payloads weighing up to 8,200 pounds (3,719 kilograms). It debuted in 1993, two years after the first Atlas 2, and launched 30 successful flights. The launch of NROL-1 marked the 63rd Atlas 2 flight and the 584th launch of an Atlas rocket since the launch vehicle first appeared in 1957.

Laffitte said launch officials planned to give NROL-1 and it's Atlas-2AS a grand sendoff by dressing up right. The mission's launch coordinator even wore a tuxedo to the first launch attempt on Aug. 27, he told SPACE.com.

"When you don your headset on your head and start the countdown, that's when you start realizing this is the end of an era," Laffitte added.

ILS still relies on a series of Atlas 3 and Atlas 5 rockets, as well as the Russian-built Proton booster, with launch sites at Cape Canaveral and

Vandenberg Air Force stations, and Baikonur Cosmodrome in Kazakhstan. The firm's next flight is set for late September, when it is scheduled to launch the AMC-15 communications satellite aboard a Proton rocket with a Breeze M upper stage from Baikonur Cosmodrome.