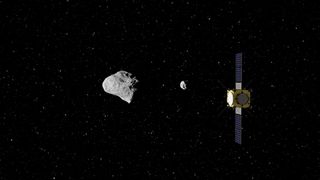 ESA’s Asteroid Impact Mission concept, currently under study, would be humanity’s first mission to a binary asteroid: the 800 m-diameter Didymos is accompanied by a 170 m-diameter secondary body.
(Image: © ESA)

In the 1998 movie "Armageddon," an asteroid "the size of Texas" threatens to destroy Earth until NASA employs a deep-sea oil driller (played by Bruce Willis) to plant nuclear bombs deep inside the asteroid and blow it apart.

Although the movie seems far-fetched — and parts of it certainly are — the need for an asteroid-defense strategy hasn't escaped either NASA or the European Space Agency (ESA). Both agencies are designing missions to test their ability to nudge an asteroid off-course if it seriously threatens Earth.

The two missions are working together as the Asteroid Impact and Deflection Assessment (AIDA), the world's first international effort to protect Earth against a possible asteroid impact.

ESA began design work on its portion of AIDA, which is called the Asteroid Impact Mission (AIM), in March. The AIM spacecrat will travel to a binary asteroid system consisting of the 2,625-foot-wide (800 meters) Didymos and its 560-foot-wide (170 m) moon, which scientists informally call "Didymoon."

If everything goes well, AIM will launch in 2020, two years before NASA's portion of AIDA takes flight. The AIM mothership will observe and study Didymoon, and also put a lander down on the object.

NASA will delve into the design phase of its proposed Double Asteroid Redirection Test (DART) in the next few months, agency officials have said. In 2022, the DART probe will fly toward the asteroid system at about 13,420 mph (21,600 km/h) and then crash straight into Didymoon.

"AIM will be watching closely as DART hits Didymoon," Ian Carnelli, who is managing the mission for ESA, said in a statement. "In the aftermath, it will perform detailed before-and-after comparisons on the structure of the body itself, as well as its orbit, to characterize DART's kinetic impact and its consequences."

The DART and AIM missions will determine how much force is needed to shift the orbit of an oncoming asteroid, helping astronomers understand the best strategy for a planetary defense system, ESA officials said.

"DART's shifting of Didymoon's orbit will mark the first time humanity has altered the dynamics of the solar system in a measurable way," Carnelli said.

Scientists and engineers will present one possible AIM design to the ESA's Council of Ministers in 2016 for approval, agency officials said.