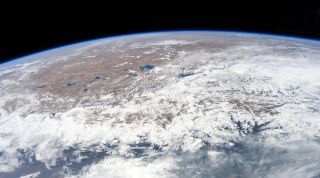 NASA astronaut Terry Virts posted this photo of Nepal's Kathmandu region as it appeared from the International Space Station on April 26, 2015, one day after a devastating magnitude 7.8 earthquake struck the country.
(Image: © Terry W. Virts (via Twitter as @AstroTerry))

Astronauts on the International Space Station have the people of Nepal in their thoughts and prayers after a devastating earthquake killed more than 4,000 people in that country on Saturday (April 25).

NASA astronauts Terry Virts and Scott Kelly took to Twitter to share messages of support for the earthquake victims in Nepal, posting photos and a video of the Himalayan nation as it appeared from space on Sunday.

"Looking down on the Himalayas, Kathmandu, and Mt. Everest," Virts wrote on Twitter. "Praying for everyone affected by the #NepalQuake." Virts, who commands the space station's Expedition 43 crew, also posted a Vine video of Nepal from space.

Kelly, meanwhile, touched on the disconnect between Earth's beauty from space and the disaster affecting the people of Nepal on the surface.

"Looks serene from @Space_Station, but my thoughts are still with the people affected by the #NepalEarthquake," Kelly wrote in his Twitter post.

A magnitude 7.8 earthquake struck Nepal on Saturday, with its epicenter located about 50 miles (80 kilometers) west of the country's capital of Kathmandu. In addition to the huge loss of life and widespread damage in the city, the quake has spawned a series of aftershocks and triggered avalanches on Mount Everest, killing some mountain climbers and spurring airlift rescues of others.

The International Space Station is currently home to a crew of six space travelers. The team includes two American astronauts, three Russian cosmonauts and one Italian astronaut. The current Expedition 43 mission will end in May. Kelly, who arrived in March, will remain aboard as part of the first one-year mission to the space station.