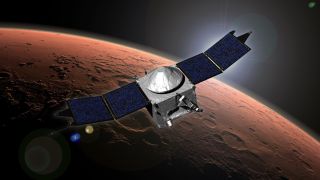 NASA's newest Mars probe recently made a risky dive into the Red Planet's upper atmosphere to learn more about how the planet's climate changed over time.

Between Feb. 10 and Feb. 18, NASA's MAVEN (Mars Atmosphere and Volatile Evolution) spacecraft reduced its minimum altitude to 78 miles (125 kilometers) — about 15 miles (25 km) lower than usual. This subjects the spacecraft to atmosphere 10 times thicker than what it usually encounters.

While there are few atmospheric molecules at that altitude, if the spacecraft were to dip much below that, it risks encountering too much drag — too many molecules to run against. If the drag is high enough, the spacecraft loses speed and can fall to Mars' surface. [See MAVEN mission photos]

In this case, however, MAVEN successfully completed the maneuver and is preparing for at least four more "deep dips" during its mission, which is projected to last at least a year, according to NASA.

"We are interested in the connections that run from the lower atmosphere to the upper atmosphere and then to escape to space," Bruce Jakosky, MAVEN principal investigator, said in a statement. "Although we changed the altitude of the spacecraft, we actually aimed at a certain atmospheric density. We wanted to go as deep as we can without putting the spacecraft or instruments at risk."

By better understanding how molecules escape into space, scientists hope to track how Mars lost its atmosphere over time. There is abundant evidence of water flowing on Mars in the ancient past, between water-soaked minerals detected by rovers on the surface and gullies spotted by orbiters far above the surface.

Extensive amounts of water, however, require a thicker atmosphere. It is believed that Mars used to play host to more light molecules — specifically a lighter type of hydrogen. But over millions of years, the sun's energy pushed these molecules out into space and thinned the atmosphere.

The first three days of MAVEN's dive were used to lower the spacecraft's orbit. It then spent five days collecting data across 20 orbits. After Feb. 18, scientists then brought MAVEN to its usual minimum altitude of 93 miles (150 km). More data on the dive will be available in the coming weeks.

MAVEN entered Mars' orbit on Sept. 21, 2014, about 10 months after launch. Besides studying the Red Planet's atmosphere, it also serves as a backup data relay spacecraft for NASA's Curiosity and Opportunity rovers on the surface.