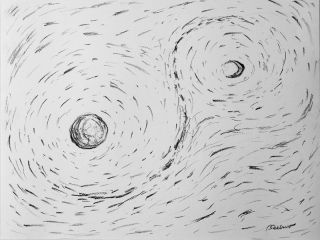 This pastel artwork by Ed Belbruno was painted while he was attempting to find an efficient trajectory for a lunar spacecraft. The solution ultimately emerged from the brushstrokes.
(Image: © © Edward Belbruno)

Edward Belbruno is a mathematician and an artist. His paintings are in major collections and exhibited throughout the United States, and he regularly consults with NASA from his position as a cosmology researcher at Princeton University. He is also author of "Fly Me to the Moon" (Princeton University Press, 2007). Belbruno contributed this article to Space.com's Expert Voices: Op-Ed & Insights.

Science often inspires artists to create new works of art. For example, the discovery of new worlds by the Kepler space telescope conjures up images in the mind of exotic unearthly landscapes. An artist can then paint possible landscapes that may exist and let his or her imagination run wild. One can think of many such examples — though inspiration from the other direction is not as obvious. When does art inspire science? Can a painting reveal a significant new scientific discovery?

I am both a scientist and an artist. The paintings that I create have given rise to interesting scientific discoveries. The paintings don't just inspire me to pursue a particular avenue of study — they literally have the key within them to help me figure out how to solve complex scientific problems. The process of how this occurs is somewhat mysterious and has happened to me many times, and recently gave rise to a revolutionary new route to the Moon.

To lunar orbit, without engines

In 1986 I first started working for NASA's Jet Propulsion Laboratory (JPL) as a trajectory designer. My training was in mathematics, where I obtained a Ph.D. from New York University in 1981, a major that was ideal for designing trajectories for spacecraft. JPL asked me to participate in the development of a special kind of trajectory that would bring a small spacecraft from Earth orbit to the moon, and then into lunar orbit. The spacecraft was to be released from a space shuttle, and using very small engines slowly spiral away from the Earth and to the moon. However, there was one catch: the engines were too small to slow the craft enough upon arrival at the Moon to go into lunar orbit.

Instead, it was necessary to find a way to have the spacecraft go into lunar orbit without using its engines! This is called ballistic lunar capture and had never been done before. The usual approach is to move quickly and directly to the Moon on a Hohmann transfer — using engines to give a lot of thrust that slows the craft and places it into orbit. In the scenario I was studying, the spacecraft's engines were just too small. The thrust was essentially zero.

I knew from my mathematical experience that if ballistic capture is possible, it is very complex, requiring the use of chaos theory to find special pathways within the chaotic transitions of the gravitational fields between the Earth and moon. Such a problem would require many months or even years to solve.

I was given only three months. This deadline was short since the entire design of the spacecraft depended on the trajectories it would use. This put the spacecraft design on hold — and all the people involved, who numbered about 20.If the trajectories were not on hand within a few months, then the mission study would have had to be substantially altered. I needed a miracle of sorts. What I did was paint.

Art as the answer

The process I used was to let my subconscious try and find the route. I painted the Earth-moon system so fast that I couldn't think, and my hands were guided from a subconscious level. I thought that this may reveal a new type of route to the moon within the brush strokes.

This idea is somewhat analogous to the deeper sense of reality one notices when looking at a Van Gogh painting. He painted so fast that his subconscious helped him reveal things the conscious mind would not notice.

When I finished the painting, which was in pastel, the brush strokes of the pastel revealed a special path from the Earth to lunar orbit. In the pastel, one sees slightly darker pastel marks making their way from a region around the Earth to a region around the Moon. The regions reveal a somewhat circular pattern that gradually tapers off. The boundary of those regions is where the trajectory starts and ends.

The boundary locations, called "weak stability boundaries," are where a spacecraft can easily leave the Earth or be captured about the moon with very little fuel. The boundaries represent transition regions between the two gravitational fields of the Earth and moon, regions that the spacecraft must pass through for ballistic capture to occur. The motion is delicate (chaotic) in these transition regions.

When the coordinates of the start of this path were estimated from the pastel and put in a sophisticated NASA computer program simulating space trajectories, the trajectory went into lunar orbit, with no rocket engines required. Within the simulation, ballistic capture had been achieved for the first time — ever.

This outcome would have been impossible in the time required by traditional scientific methods.

Four years later, in 1991, a route like this was found by myself and a colleague, James Miller, also of JPL, to rescue a Japanese lunar mission and get their spacecraft, Hiten, to the moon — the first operational demonstration for the theory.

Until the demonstration of the ballistic capture transfer by Hiten, there was little confidence in the theory at JPL, even though the first transfer was found in 1986. It was not understood and not felt to be useful due to the fact it took two years for thespacecraft to get to the Moon. The successful use of ballistic capture by Hiten gave the proof that the theory was valid. However, because the methods were so different from the usual approach, it took a decade for the theory to gradually become accepted. Now, ballistic capture transfers are an integral part of the tools NASA and ESA use to design transfers to the moon and other locations.

The use of art to reveal scientific discoveries in my work has occurred several times, and each time it is reveals an exciting and mysterious process.

A feature documentary on Ed Belbruno, will premiere in New York City on Friday Jan. 16th, 2015 at the Philip K. Dick Film Festival.Follow all of the Expert Voices issues and debates — and become part of the discussion — on Facebook, Twitter and Google+. The views expressed are those of the author and do not necessarily reflect the views of the publisher. This version of the article was originally published on Space.com.